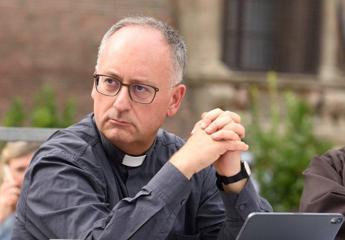 The director of Civiltà Cattolica talks about the legacy of the Pope emeritus: “In him the understanding of faith”

The death of Benedict XVI makes us reflect “on the great legacy he left to the Church”. Father Antonio Spadaro, director of La Civiltà Cattolica, reflects with Adnkronos on the legacy that the Pope emeritus, who died this morning at the age of 95, left to the Church. “If I had to identify two fundamental elements of the pontificate – he observes – I would say: a great love and passion for the Church itself. The Pope Emeritus was a Pastor, a man who wanted a Church ever more similar to the face of Christ”. Spadaro gives concrete examples: “His commitment, for example, for financial transparency, the fight against abuses, which he has initiated, are aspects that make us understand how Benedict really wanted a Church as the light of the world”.

The director of Civiltà Cattolica, Joseph Ratzinger still recalls the “great passion for the life of the Church, its development, the pastoral dimension. Then its theology: we often speak of a theologian Pope, I would say a pastor Pope, who is also theologian, and perceives theology not as a purely academic but a profound aspect of the life of the Church linked to the understanding of the mystery of Christ”. In Ratzinger, to quote Spadaro, there was “the intelligence of faith”.

A Pope, Benedict XVI, “fully involved in historical events, seriously understanding the great challenges for the life of the Church posed by the modern world. He tried to understand them lucidly by approaching them and also dialoguing with secular thought, catching important elements for preaching, like the fact that the Gospel was rooted: everything in his pontificate had this orientation knowing that he was supported by the consolation of the Lord. He said it himself in his last message”. The Jesuit continues, broadening the discussion to include the current pontificate: “Then time will make us understand the legacy; what seems clear to me, considering the pontificate of Francis, is that there hasn’t been a leap at all as some claim , but there was a passing of the hand of a baton. A torch changed hands in an unprecedented way from one Pope to another with a profound unity of intentions and visions”.