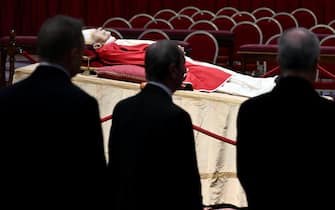 Today is the last day for the homage to Joseph Ratzinger in St. Peter’s Basilica. The funeral home for the Pope Emeritus will remain open to the faithful for the last 12 hours, from 7 to 19, before the funeral scheduled for Thursday

Ratzinger, the timelapse of the line of faithful queuing to greet Benedict XVI. VIDEO

So far in two days, have been about 135 thousand faithful who wanted to pay their last respects to Benedict XVI, a figure decidedly higher than expected and which today could lead to extension of the opening of the funeral home, before the funeral on Thursday. In detail yesterday there were 70,000 admissions, while there were 65,000 on the first day

The faithful pay homage to Ratzinger: 135,000 people in two days for a last farewell. PHOTO

Outside, in the churchyard, everything is ready for the funeral, which will be attended by religious leaders and heads of state and government. The former, including the Hungarian premier Viktor Orban (pictured yesterday at the funeral home), they have already arrived at the Vatican but others are expected in the next few hours

Death of Ratzinger: Islam, Jews, Buddhists, the tribute of other faiths to Pope Benedict XVI

Although the official delegations foreseen by the funeral ceremonial are only that Italian and German – led by Sergio Mattarella, Giorgia Meloni, Frank-Walter Steinmeier and Olaf Scholz – there will be numerous political personalities who will take their seats in the square, from the Belgian royals to the presidents of Poland and Hungary, Andrzej Duda and Katalin Novak

Pope Ratzinger’s funeral, from heads of state to royalty: here’s who will attend the funeral

Also numerous i religious leaders which will pay homage to the Pope Emeritus. Among these, the Patriarch of Antioch of the Syrians, Ignatius Youssef III Younan, the metropolitan of the Russian Church Antonij of Volokolamsk and a delegation of the Orthodox Patriarchate of Constantinople confirmed their presence

Pope Ratzinger, body exposed in St. Peter’s: this is how it is kept

Yesterday the president of the Senate went to the Basilica Ignatius LaRussa (in the photo), the Minister of the Interior Matteo Piantedosithe Ukrainian ambassador to the Holy See, Andrii Yurash

Death Ratzinger, all the videos

The actor too Lino Banfi yesterday he gave a last farewell to Ratzinger in St. Peter’s Basilica

imposing thesecurity apparatus prepared by the prefecture of Rome during the provincial committee for public order and safety which met yesterday. They will be on the field 1,000 agents which will intensify the filtering and control operations of the tens of thousands of expected faithful and tourists. There will also be a second advanced medical facility

Ratzinger, the first Pope to land on Twitter: here’s what happened

For funerals they are expected more than 60 thousand people. Inside the Vatican walls, on the other hand, work will continue on a regular basis. The offices of the Holy See will remain open, although employees of the Roman Curia and of the Governorate will still be able to attend the funeral during working hours “by informing their superiors in advance”, as stated in a circular from the dicastery coordination office

Death of Pope Ratzinger: who is father Georg Gänswein, the trusted assistant of Benedict XVI

At the end of funeral ritewhich will be presided over by Pope Francis but probably celebrated by the dean of the college of cardinals Giovanni Battista Re, the coffin of Benedict XVI will leave St. Peter’s square to reach the Vatican caves where he will be buried during a private ceremony. Inside the coffin will be placed the coins and medals minted during his pontificate, but also the pallia and the deed, i.e. the legacy of his history as Pope

Joseph Ratzinger: the story of Benedict XVI, the Pope Emeritus who resigned. PHOTO