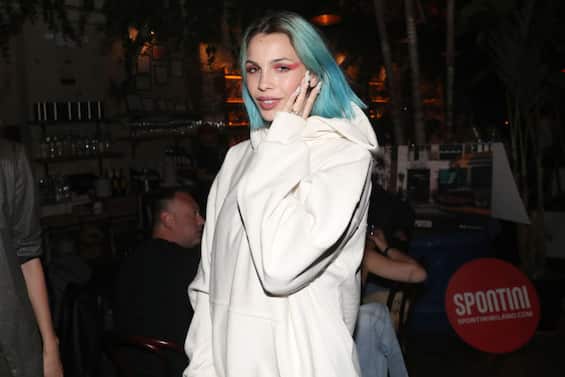 “Thoughts are razor blades,” he sings Rose Villain in his new single, playing to ignore that those cuts that anxieties leave behind them can become little Fontanas. The ′′ seems and the unspoken words, the punches in the belly like Tekken” are the ingredients that the singer born as Rosa Luini uses to create her songs, a little sad and a little melancholy, perfect for cheering up the nights in a dark city like the ones watched over by a Batman (it is no coincidence Razor blades just anticipates the debut album Gotham radio). Who can understand her better than her “mentor” Psalm, who sees his art born from the same humus? The Sardinian rapper and the singer born in Milan meet almost seven years ago Father Medellin and the feeling is that the handbook intoned by Rose in the refrain of that piece is still valid for both: “Dancing with the devil. Take it nice and slow”.

Psalm, Rose Villain and the sky (lead) in the room

The video clip directed by Amedeo Zancanella makes Psalm go back to looking for “the sky in the room”, to quote the title of one of his most sentimental passages. Rose Villain, who with the rapper of Kumite had appeared on the Italian scene, she asked him to show off that “part of his soul that he often keeps hidden” in a “very intimate track that speaks of anxiety and depression”. In the video we see the two protagonists literally condemned to drown within their four walls, in a world where everything appears to be really upside down and without grips. In the end, the meaning of the piece is perhaps all in that plea launched at the end, that “ask me how are you”. This is confirmed by the artist herself when she says: “Con Razor blades I would like us all to feel less alone in our suffering and to ask for help without fear of being judged.”.

“How are you? Do you distinguish yourself from the cliché?”. And other questions that would be good to ask

Reading the interviews found on the web, one thing is clear: Rose Villain is torn between two selves. The singer lives between New York and Milan but above all between the desire to hide her ghosts behind her the English and her alter ego and the contemporary desire to drive her demons out of her, evoking them in the language in which they talk to her. In Razor blades (and presumably throughout the album) in the end this second push won, in a context where even “fun and exaggeration are in any case a derivative of suffering”. The singer works a lot on preserving her mental health but this attempt not to drown in one’s fears is not the same as wanting to hide one’s fragility. This would be counterproductive and a song like Lamette also serves to try to make the listener understand it “outside the room”: “People are closed, they are afraid to ask for help and feel judged, they have difficulty expressing themselves and perhaps seeing a person of which I am a fan who says that living those emotions is ok, that it is allowed to be like this, that one is not alone in this shit, can be useful”, said the singer in an interview with Mattia Barro on Rolling Stone.

A razor blade to pierce the darkness of one’s soul

It’s easy to believe that this “quick hit” that is already conquering the radios was born just as quickly and naturally, just a few days before the release of the disc. Rose Villain said that that refrain that had been spinning in her head for a while evolved into something more structured almost in extremis, giving her the opportunity to close a circle and involve Salmo again: “I approached the Italian music scene with Mauri, years ago, with Father Medellin and I was too keen that this record somehow ended (and opened) with him”, said the artist with the blue hair. With the Rose Villain razor blades she tries not to cut her veins like Donatella Rettore but rather to pierce the darkness inherent in the darkest and most hidden corners of herself. It’s a painful and not an easy experiment but she reminds us how important it is sometimes to stop, take a breath and ask ourselves “well, how are you?”.