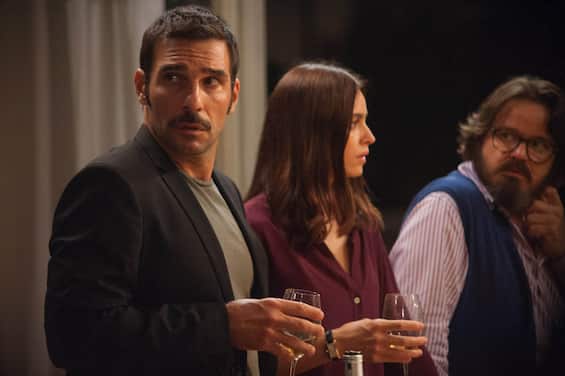 
Most readers may not have seen the Hungarian film Buek or not having in mind the plot of the Russian comedy Gromkaya Sayaz. The Polish film is unlikely to sound familiar to many (Nie)znajomi or the Japanese Otona no Jijou: Smartphone wo Nozoitara. And yet, if you are Italian, it is very probable that you have seen the cinematographic work that inspired all these works, which more or less faithfully took their cue from the same Italian source: Perfect strangers. The movie of Paul Genoese in 2016 it quickly became a case, able to conquer audiences and critics even overseas, so much so that the race for the remake was triggered. Today, seven years later, with the Icelandic version just arriving in theaters, we are now at twenty remakes. And it’s not over yet.

Perfect strangers it was an immediate success upon its release in Italy. It raked in something like 17 million euros at the box office, also taking home several awards, such as the David di Donatello for best film or the award for best screenplay at the Tribeca Film Festival in New York. It even had an impact from a “social” point of view, if possible, if we think that there was a surge in divorces and betrayals due to the desire to replicate the game at the center of the film in reality. The director Paolo Genovese himself recounted this last unexpected turn who, with great humility, has always recognized that in the exploit of Perfect strangers good fortune and favorable astral circumstances also played a role: “There are more beautiful films, but it has been able to intercept a social phenomenon in which everyone has identified. I don’t know if it will ever happen again, I was lucky”, the filmmaker admitted some time ago in an interview with Republic. However, it is fair to remember how much it takes even discreet acumen to find something new but at the same time universal to tell today: in a world where we are increasingly tied to our phones, choosing to share the contents of that black box cannot be a game like many others, to be played at dinner with friends: revealing the messages we receive, what we say to ourselves through our devices, is equivalent to putting our lives on the streets for better or for worse. A risk that unites us all, regardless of whether our residence is in Copenhagen or Seoul.

Stranger in my pocket and other versions of a worldwide success

The producer of the film Giampaolo Letta he had immediately sensed the potential of Perfect strangers: “The idea behind the story works in Rome, as in Tokyo, as in New York,” he said at the time of the film’s theatrical release. At the time there were already rumors of various countries interested in acquiring the film rights to orchestrate their own remake but, not even in the most rosy expectations, one would have ever come to think of a panorama like the current one: to date Paolo Genovese’s work has had twenty revisitations, the latest release just a few days ago in Iceland. The next version to arrive in theaters, now imminent, will be the Danish one which will make this film enter even more in the Guinness World Record. Already in 2019, when there were “only” 18 remakes in the world, Perfect strangersi could boast of being the most remade film in the history of cinema. A primacy that seems destined to be constantly improved, even if it must be said that each film then often focuses on different themes than the original. Already from the international title of many of these remakes one can guess what was most interesting to focus on: in China, for example Kill Mobile focuses more on the pervasive relationship there is with technology while Turkish Strangers in My Pocket suggests how much those relationships that we keep “in our pocket” should be taken with a grain of salt.

The not-so-perfect strangers who angered the Middle East

Finally, however, it should be remembered that, while adopting all possible precautions, it remains difficult to adapt such a story so many times, always avoiding controversy. Netflix had been banking heavily on the Middle Eastern remake of Perfect strangers, introducing it as the first Arabic-language film launched on the platform. To avoid censorship in many states, the Californian giant had then decided to gather the cast (made up of stars from different Arabic-speaking nations) in Beirut. A shrewdness that allowed the film to be produced without a hitch but which was not enough to avoid controversy once the work was actually made available for viewing: especially in countries such as Egypt, many criticized the film heavily, which deals with topics considered authentic taboo in certain cultures (think of homosexuality or adultery). The storm of criticism even led some to file formal complaints with the authorities of their country, sparking a debate in which Netflix itself was finally forced to speak out: “Perfect strangers it is a work of fiction that tells universal themes without expressing any moral judgment, but inviting the viewers to an open dialogue, to debate. The film tackles sensitive issues with sensitivity and humour, led by a talented Arab cast who are solely focused on achieving creative excellence”.

From this answer we understood that even the executives of the streaming giant understood the lesson that the character of Marco Giallini: “But I learned one important thing. Know how to defuse. Don’t turn every argument into a supremacy fight. I don’t think those who are willing to give in are weak, on the contrary, they are also wise”. A discreet maxim, valid at all latitudes, which at this point we ask ourselves: how will it sound said in Japanese or Spanish?