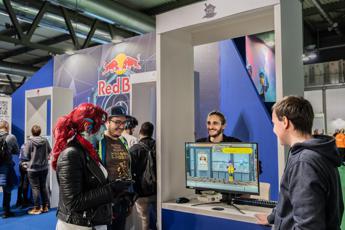 The winner of the latest edition of Red Bull Indie Forge is Venice 2089, the title developed by Safe Place Studio. This latest edition of the Red Bull Indie Forge competition, an initiative capable of performing the function of incubator for video game development studios in Italy (more than 160 and with a turnover of 2.179 billion, according to the census IIDEA 2021), was characterized by the presence of projects with a connotation closely linked to those current issues capable of arousing the sensitivity of public opinion.

The storyline of the game is inspired by events that actually took place in the lagoon city right next to 2019. The record tides that have affected Venice are a reality that could have far more serious consequences than those we are used to today. And the strong attachment that some members of the team have with this city was the starting point for giving life to the figure of Nova, the young teenager protagonist of the title who, aboard a hoverboard, will be called upon to explore the city and interact with the few remaining inhabitants to find some solution to the causes of the continuous flooding.

Winner of the Audience Award was Caracoles, developed by Yonder. A game that, according to its authors, has a peculiarity designed to be as inclusive as possible. In fact, anyone can try their hand at Caracoles, tracing a line with their finger from point A to point B in the shortest possible time and as precisely as possible. Once all the players, up to a maximum of 100, have given their input on the device’s touchscreen, stylized snails will battle each other by racing against each other along the path exactly as it was drawn before the start.

Despite the awards assigned by the jury of experts on one side and by the public on the other, all the competitors of the 2022 edition of Red Bull Indie Forge have shown that the Italian indie scene is in excellent health, an unequivocal sign of the ferment that characterizes this sector is always looking for the right consideration. All 5 titles selected for the final, from Extra Coin by CINIC Games, up to Crime o’ Clock by Bad Seed, passing through Spanky’s Battle Swing, created by Green Flamingo and of course the two winners – Venice 2089 and Caracoles, stand out for their narrative component, for the ingenuity of the mechanics, for the original and creative graphic style, for the innovation in the gameplay, and much more.