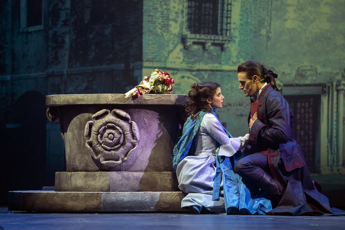 “I have long cherished the idea of ​​composing a musical work dedicated to the city of Venice”, confesses the historic member of the Pooh

Venice in Rome: but not for the films of the Mostra dei Cinema from the Biennale to the Capital, but for the ‘Casanova’ Of Red Canzian which in the musical, or rather in this ‘pop opera’ as the subtitle reads and as its author decidedly prefers’, reproduces and re-proposes the Venetian atmospheres linked to the character to whom the musical and theatrical blockbuster is dedicated, on stage until 22 January at Brancaccio theater in Rome. With Gian Marco Schiaretti in the role of Casanova and the same Red Canzianeven if for a temporary replacement, in that of the Doge of Venice, 21 performers, 11 singers and actors and 10 dancers and acrobats are involved on stage, all directed by the director Emmanuel Gamba.

“I have long cherished the idea of ​​composing a musical work dedicated to the city of Venice – confesses the historical component of Pooh – perhaps the only one in the world of such fame not to have ‘its own’ musical; it’s at James Casanovaone of the universally known Italian characters, but so far told in a monothematic key, that of the unrepentant libertine, while I wanted to represent him in the many nuances that make him one of the most interesting historical figures that Italy and Venice in particular can boast: poet , alchemist, libertarian, diplomat and ‘eyes’ of the Republic of Venice, a key figure at the time of Most serene“.

‘Casanova Opera Pop’ is loosely based on the novel ‘Giacomo Casanova, the sonata of broken hearts’ by Matthew Strukul. The return of Casanova to Venice and the new escape from the city, the vicissitudes of the Serenissima and the historian Carnivalthe conquests and amorous traps, the duels and the masks, take on an even more real dimension thanks to the in many ways ‘cinematographic’ or ‘television’ scenography which allows for more than thirty rapid scene changes, with the staging immersive scenic signed by the same Red Canzian with the help of photos taken during the pandemic, in one Venice ‘deserted’ and perhaps even more fascinating for this reason.