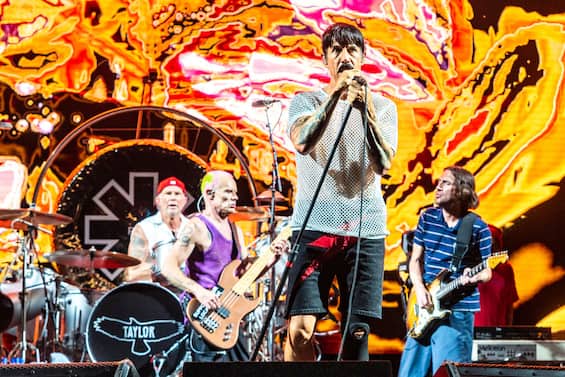 The fans of the Red Hot Chili Peppers they certainly can’t complain about the productivity of their favorite band in recent times. In 2022 alone Anthony Kiedis and associates have released two very successful albums, both capable of reaching the top of the charts in the same year. The Red Hots have produced so much music that they are forced, in some cases, to even relegate some very valid songs to the rank of bonus track. Fortunately, sometimes these songs are fished out and equally become singles, ready to emerge from subordination and take over the world. It is the case of The Shape I’m Takin’.

When in 1984 Alphaville sang Big in Japan there was a hint of mockery in their words. In fact, the song targeted those Western bands who aimed at the Land of the Rising Sun to find an unknown success at home. The Red Hot Chili Peppers are hugely popular in and around Tokyo but have not released The Shape I’m Taking on the Japanese version of their latest album only because they had no other audience to talk about: it was more of a tribute to a people who were faithful and always enthusiastic about their music, just look at concerts like the one in Yokohama in 2004 (which is also on Youtube). The Shape I’m Taking was born as a bonus track designed for the Asian country, exactly like Nerve Flip (who had played the same role on the previous album unlimited love). It was supposed to be another special gift for Japan, almost as if by now the gift of an unreleased song to Japanese fans represented an auspicious tradition for the group. Except that it took the Red Hot Chili Peppers little to realize that The Shape I’m Taking her potential was too great to be confined to such a particular dimension and she was soon promoted to single officer.

It is no coincidence that this new piece is very reminiscent in its sonority of that fortunate period that goes from Californication to By the Way. Those two albums were in fact probably the ones where John Frusciante it was more center stage. Mostly By the Way it represents perhaps the record where the guitarist has had the most creative control, influencing the work with his passion for things like the Beatles, the Beach Boys and doo-woop. Today the great return of RHCP is also motivated by the umpteenth comeback of the musician who “left the group” and who still gives, in songs like The Shape I’m Takin’, a sumptuous funky soul to the whole. The new song is clearly the daughter of that desire to rediscover one’s roots that had been at the center of the recordings of Unlimited Love and it’s no surprise that the Red Hots were hesitant to include it in the tracklist, given how much it recalls so many of their unforgettable hits from the past. Many wish to The Shape I’m Taking the same fortune as another classic of the band effectively kept off the tracklists of the official albums: Soul to Squeeze. This last song also had a particular path, being excluded at the last da Blood Sugar Sex Magik. On that occasion, an unfortunate comedy with Dan Aykroyd turned out to be fundamental for the “repechage”, which arrived here only on home video with the title Cone heads and which remained in the collective imagination almost only for the Red Hot song included in the soundtrack. In the video di Soul to Squeeze Frusciante did not appear even though he had played the guitar in the piece, fully participating in the drafting of the same before one of his many momentary goodbyes. Today, however, the guitarist is back at the forefront and is contributing decisively to the “shape It’s taking” the Red Hot Chili Peppers project. For the happiness of fans, Japanese and otherwise.