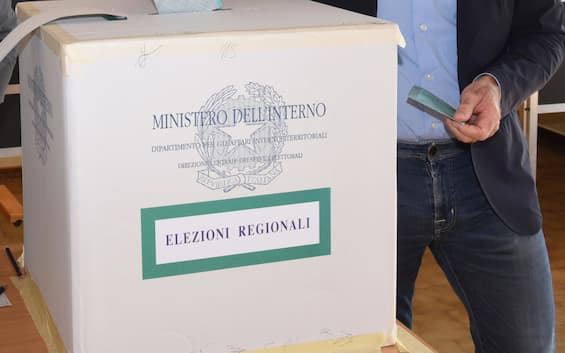 On 12 and 13 February in Rome, Milan and in the other cities of Lazio and Lombardy we vote for the renewal of the regional councils. There is no ballot in the event that no candidate exceeds 50% of the votes and alternating votes by gender are possible, by expressing the name of a candidate and a candidate from the same list

February 12 and 13 will be two important days in Rome and Milan. On that date, the elections for the renewal of the Lazio and Lombardy Regional Council will be held: in the first, the successor to the outgoing Nicola Zingaretti, elected to the Chamber of Deputies after ten years at the helm of the Giunta, will have to be chosen, while in the second, Attilio Fontana, chosen by citizens in 2018, runs for a second term. Both electoral laws provide for the direct election of the President of the Region and of the Regional Council in a single round, by direct suffrage. The vote is expressed on a single ballot, which shows the provincial lists and the regional coalitions of candidates for councillors, linked to one’s own or one’s candidate for president. The polls in both regions will be open on Sunday 12 February from 7 to 23 and Monday 13 February from 7 to 15: don’t forget your identity card, which you must take with you to the polling station.

The election of the Lazio Regional Council

There are three candidates for the office of regional president who compete in Lazio: there are the journalist Donatella Bianchi, who runs for the 5 Star Movement and the progressive Polo; the current Councilor for Health Alessio d’Amato, candidate from the Democratic Party and the Third Pole; finally there is Francesco Rocca, president of the Italian Red Cross, chosen by the centre-right coalition. In the event that none of the candidates exceeds 50% there will be no run-off: whoever has obtained one vote more than the others will win. 80% of the seats in the Regional Council are assigned using the proportional method, to competing district lists (present in each of the 5 regional provinces), with the application of a 20% majority premium for the governor-elect’s lists. Separate voting is permitted, i.e. voting for a candidate for president and then for one of the other lists not connected to him, and gender alternation is envisaged, with the possibility of expressing up to two preferences, choosing between a candidate and a candidate from the same list. If two men or two women are indicated, the second preference will be cancelled.

According to the latest surveys, the fight between the candidates is close: an Izi poll of 29 December underlines how Rocca is 42%, D’Amato 34% and Bianchi over 18%. Other polls underline, however, how the candidate of PD and Action / Italia Viva is also well regarded among pentastellati voters; in fact, in a hypothetical race together with the M5S, D’Amato would break through the wall by 50%, managing to beat Rocca.

Several leading names stand out in the ranks of the parties: for example, in the ranks of the M5S, there are the former president of the IV Municipality of Rome, Roberta Della Casa; the outgoing regional councilor Valerio Novelli; the former mayor of Pomezia, Adriano Zuccalà and the former group leader in the Campidoglio, Giuliano Pacetti. To these is added the secretary of the Flai-Cgil Tina Balì, among the most voted during the primaries of the Movement, the so-called “regionaries”. Among those who instead support D’Amato, the leaders of the constituencies in the Democratic Party are noted, chosen by the local leadership of the party: there will be Daniele Leodori in Rome, Sara Battisti in Frosinone, Salvatore La Penna in Latina, Enrico Panunzi in Viterbo and Edoardo Ranalli in Rieti. In the ranks of Azione-Italia Viva, the presence of a politician of national caliber such as Luciano Nobili should be highlighted, to which are added Marietta Tidei, outgoing regional councilor; Alessia Pieretti, delegate in the metropolitan city and councilor in Monterotondo, and Raffaella Vecchiarelli, secretary of Action at Town Hall X. Local political figures also present in the ranks of center-right councilor candidates, who will try to pull the sprint for Francesco Rocca: Fratelli d’ Italy will field Giancarlo Righini, Roberta Angelilli, Fabrizio Ghera, Massimiliano Maselli and Antonello Aurigemma. Matteo Salvini’s League, on the other hand, will present the outgoing councilors Daniele Giannini, Pasquale Ciacciarelli and Giuseppe Emanuele Cangemi in its lists, while Forza Italia will have Fabio Capolei and Enrico Cavallari. Alongside them are also the former mayor of Gaeta, Cosmo Mitrano, and Simone Foglio.

The election of the Lombardy Regional Council

While in Lombardy the outgoing governor Attilio Fontana is back for the center-right; for the Third Pole, including Azione and Italia Viva, there is Letizia Moratti, until a few months ago Fontana’s deputy; for Unione Popolare (a coalition including Communist Refoundation, Potere al Popolo and De.Ma) there is the sociologist Mara Ghidorzi; and finally, for PD and Movimento 5 Stelle, MEP Pierfrancesco Majorino presents himself, with a past in the municipal council of the mayor of Milan Beppe Sala. Also in Lombardy, as in Lazio and in the other Italian regions, there is no ballot in the event that none of the candidates exceeds 50%: the one who gets one vote more than the others wins. The members of the Regional Council are elected on a proportional basis, on the basis of competing district lists, with the application of a majority bonus. The districts coincide with the 12 provinces of Lombardy. The groups of provincial lists presenting the same or the same presidential candidate are united in a list coalition and the presidential candidate linked to them represents the head of the coalition. The coalition linked to the governor-elect obtains at least 55% of the seats in the Regional Council, if the candidate has obtained 40% of the preferences, and at least 60% if he has managed to exceed 40%. Lombardy’s electoral law also sets a limit: the winning coalition cannot have more than 70% of the seats in the entire Council. Gender alternation is envisaged in plurinominal lists, with the possibility of expressing up to two preferences, choosing between a candidate and a candidate who belong to the same list and writing their surnames on the ballot paper. If you indicate two men or two women, the second preference will be cancelled.

According to the latest poll, carried out by Izi between 5 and 6 January 2023, the distance between Fontana and Majorino would be just 4.2 percentage points: the center-right candidate would in fact reach 43.2%, while that of PD and M5S would reach 39%. Far more distant, however, would be the candidate supported by the Third Pole, Letizia Moratti, who would reach 17.8%.

There are many illustrious personalities present in the lists: in the ranks of the Brothers of Italy we note the presence as leaders of the journalist Vittorio Feltri, strongly desired by the premier Giorgia Meloni, to which are added Marco Bestetti, fresh from leaving Forza Italia, Matteo Forte, who came out of popular Milan, and the conductor Alberto Veronesi, son of the famous oncologist Umberto. Many local faces are present in the Lega lists: the municipal councilors Pietro Marrapodi and Samuele Piscina are present, as well as the regional representatives Deborah Giovanati, Riccardo Pase, Silvia Scurati, Curzio Trezzani and the councilor for Culture Stefano Bruno Galli. The leading name of Forza Italia is instead that of Giulio Gallera, former regional councilor, to which are added the outgoing Gianluca Comazzi and Fabio Altitonante, the mayor of Assago Lara Carano and the former mayor of Bollate Stefania Lorusso. Many political personalities also known in the Third Pole lists for Moratti: from Italia Viva the leaders, former parliamentarian, Lisa Noja; from the League, Gianmarco Senna; from the Pd the municipal councilor, former MEP, Carmine Pacente; from the pro-European civic Lombardi the regional councilor Elisabetta Strada. In the civic of Moratti the leaders Manfredi Palmeri will be joined by the president of the anti-mafia commission Monica Forte. Instead, local names are those present in the lists of the Movimento 5 Stelle: the outgoing councilor Nicola Di Marco was chosen as the leaders, together with his colleague Gregorio Mammì. With them, there are also the former mayoral candidate in Melzo Federica Casalino, the municipal councilor Alberto Arosio and the municipal Daniele Tromboni (Sesto), Massimiliano Mantovani (Bollate) and Barbara Sordini (Novate). In the Democratic Party, the presence of the former director of the Bollate prison Cosima Buccoliero stands out, while in the civic of Majorino the virologist Fabrizio Pregliasco, the radical Michele Usuelli and the founder of the Milan Sentinelli Luca Paladini are present.