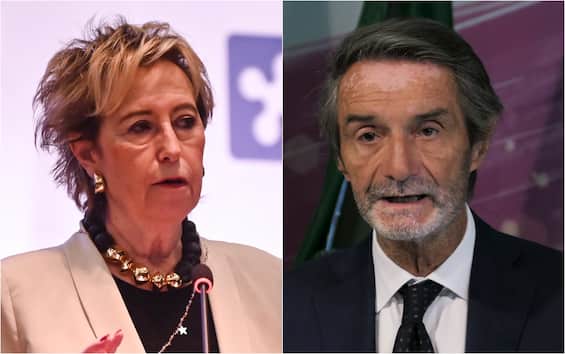 The vice president of the Region said that for next year’s regional elections she is expecting “a decision from the center-right”, but she has “also worked on a civic network that I have built”. She adds that she was “called by Fontana at a difficult time. I accepted out of a sense of responsibility, with the parallel commitment of a handover at the end of the legislature”. But the regional president replies: “Make it clear, with us or against us. I did not promise you anything, it is the prerogative of the parties “

Letizia Moratti will be in the running for the regional elections in Lombardy in 2023, but her availability immediately created controversy, triggering an immediate reply from Governor Attilio Fontana. The current vice president of the Region, interviewed by Marco Damilano on Rai3, broke the delay by saying that she will be on the field “with a civic network. In a fair and coherent way – explains Moratti – I await a decision from the center-right that I think should be final “, but” I also worked on a civic network that I built, listening to different worlds from industry to the third sector, to agriculture, to culture , to understand the different requests, positions and proposals, and build a program. “Everything is ready, therefore, but first we await the response of the coalition: a response that Fontana’s deputy has been demanding for months, after having given her willingness to be a candidate. “Of course – he concedes – after the formation of the executive, because I am aware that the political forces at this moment must concentrate on the formation of an executive which will not be easy in such a critical moment for the country and for the international community” .

No reference to the fact that Attilio Fontana, president in office, continues to profess himself the center-right candidate in view of the electoral race, supported by his party and by the leader Matteo Salvini who carries on the slogan according to which ‘team that wins you do not change’. Moratti, however, explains that she was “called by President Fontana at a particularly difficult time. I accepted out of a sense of responsibility and love for my region, with the parallel commitment of a handover at the end of the legislature”. And she is now unwilling to give up.

Moratti: “No to ministerial posts”

Moratti’s is a categorical no even to the hypothesis of a ministerial commitment in Rome, which would exclude it from the Lombard games: “I would be honored but I would not accept – he explains – I think I can give greater added value here in my region, which is also engine of the country from an economic and innovation point of view. Helping Lombardy means serving the country “. And “I think it is more consistent on my part to continue”. Her, Moratti specifies, in Lombardy “is not a self-nomination but an availability, it is very different”. Someone, he warns, is already ready to give her his support: “There were those who asked me (to run as a candidate) but, for institutional confidentiality, until the center-right clarifies his position I will not say who”.

Fontana in Moratti: “Clarify, with us or against us”

The president of the Lombardy Region, Attilio Fontana, immediately commented on Letizia Moratti’s interview: “At this point, it is I who is asking Letizia Moratti for a clear and definitive clarification, starting in the next few hours: because one thing is politics, a ‘other playing on people’s repute and administering without knowing which side you want to be on: with us or against us. “Then he added:” Contrary to what you said, I have never promised anyone a handover The end of my mandate. It is a prerogative of the parties, then as now. It was neither then nor today in my availability “.

Lega: “Come on with Fontana, those who change their minds step aside”

“There is amazement and bewilderment for a councilor like Letizia Moratti who has worked and is working in a center-right junta, but who for months has announced that she wants to run as a candidate with other parties, perhaps even supported by the left. consequences “, said Fabrizio Cecchetti, Lombard coordinator of the Lega.” With all the challenges that await the Lombardy Region in the coming months, we have no time to waste with doubts, controversies or personal ambitions. Forward with Attilio Fontana and his team, rewarded by over 50% of the votes also last Sunday. If anyone has changed your mind or team, step aside. “