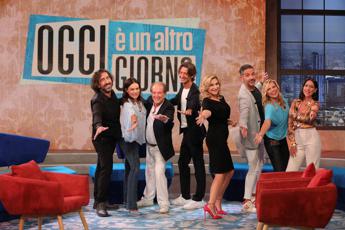 After what appeared, live on Rai1, as a groping by the singer towards Jessica Morlacchi and the consequent criticisms appeared on social networks, the host of the program announced her decision to viewers

Singer Memo Remigi is out of the cast of ‘Today is another day‘, the program conducted by Serena Bortone. And it is precisely the hostess to make the announcement with firm words, after the controversy had already inflamed on the social networks following what last Friday had appeared as a groping by Memo Remigi towards the singer Jessica Morlacchi, aired live on Rai1. Little did the statements of the singer who defined him a of him was linked to personal needs of him. The decision has now been made and the tone has been final. Evidently the rumor about the suspension was more than founded and Memo Remigi had not been informed until today. Even if at the moment we can no longer even talk about suspension. Remigi is out.


“From Monday Memo Remigi – Thundered, addressing the viewers today at the opening of the program, Serena Bortone – is no longer part of our work group. Remigi in this study has made himself responsible for a behavior that cannot be tolerated in this program, in this company and as far as I am concerned nowhere. Out of respect for the person involved we had kept secrecy, but now that the episode has gone public I feel I have a duty of sincerity with you and also publicly express my solidarity with Jessica. My solidarity, the director, the company and my deep regret. I’ll stop here for now “.

In the morning, however, Memo Remigi had expressed himself in a completely different way in an interview with Fanpage: “There is nothing to explain, we have always had a goliardic atmosphere among us, among stable affections, we joke and he makes jokes. It was an involuntary gesture. I was trying to fix the microphone behind it, which had fallen out of the belt. I put my hand behind him because this microphone was falling and jokingly I gave him the pack on the ass. But let’s not go into details , I just say that I had no intention of being a libidinous man, I am my age and I have never been this kind of person “.

“Morlacchi, poor star – continued Remigi – is the one who suffered this most of all. I apologized and I’m sorry that in this case she is a bit of the victim of this situation. I had no intention of to put her on the level of vulgarity and violence against her. It was a goliardic thing, they slap each other on the back and sometimes even on the ass. If we look at what really happens on television, it doesn’t seem to me that this great scandal was. ” he noted. And on the rumors of a suspension, clearly ignoring what was being decided in Rai, he said: “They didn’t suspend me. Now I’m waiting to see what happens, but I had some exams to do, I got the coupon, you know, at 84 years old… but it’s not true that they suspended me, for now I haven’t had any news about this “.

And the news came. After the announcement to viewers by the presenter, the Company made the decision official in a note: “Rai has terminated the contract which provided for the participation of the artist Memo Remigi in the program ‘Today is another day’. of a behavior in violation of the Company’s Code of Ethics, the Day Time Management had already decided on Saturday 22 October to suspend attendance in the program that was communicated to the person concerned. The stable Commission for the Ethical code of the Company confirmed the violation of the rules “.