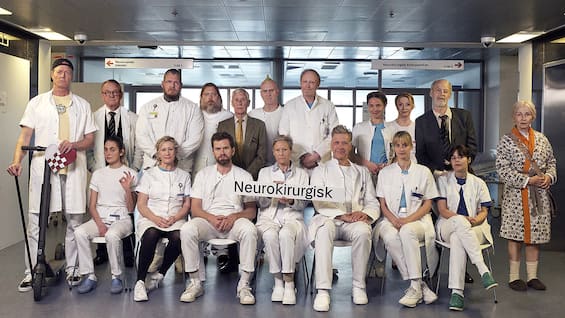 Certain Kingdoms make huge turns and then return. How Riget- The Kingdom. It was the year 1994, when the director Lars Von Trier, dazzled by the vision of Twin Peaks, decided to shoot a miniseries set in a hospital built on a swamp where the dyers came to moisten the large sheets which they then spread for whitening. In 1997 the Danish filmmaker signed a second season. And now the finale of a cult fiction has arrived at the 79.m Venice Film Festival. Almost 30 years later, a lot has changed. It took Von Trier three and a half years to finish these five final installments. At the end of July, the director discovered that he had contracted Parkinson’s disease which prevented him from being present at the Lido. But art is stronger than reality. And before the screening Von Trier sent a video message in which he thanked the masters of Italian cinema from Fellini to Pasolini, from Antonioni to Visconti, from Leone to Morricone, from Ferreri to Cavani.

Lars Von Trier, whatever happens to him will always be a divine rascal, a saboteur of conventions, an author who doesn’t give a damn about marketing and algorithms. You understand this from how the first episode of The Kingdom Exodus begins. In a Rossinian crescendo of self-irony, Lars makes fun of him, Someone calls him an idiot, others say that the series is nonsense they criticize the finale of the second season of the series. Because Exodus is a dizzying “Mass into the abyss”. A dream within a dream. A nightmare within a nightmare. What is the reality? What really happens in the lanes of the Kingdom for the first time is no longer the best in Copenhagen There is something rotten in Denmark, but even in Sweden they are not joking. At least judging by the behavior of the doctor Helmer Junior (Mikael Persbrandt), who misses Ikea, Volvo and above all his father, who died in the second season. Of course, being Swedish is a great challenge if you work at the Kingdom, so much so that there is also an “anonymous Swedish” clandestine to help the natives of Stockholm and its surroundings.

The third season of Riget teaches us that the Exodus is a double-edged sword. The forces of good, but also those of evil have decided to open the doors. In a macabre dance, Ingmar Bergman’s Settimo Sigillo model, we might see them clinging to dance together. Meanwhile, the little brother risks turning into a big brother, the porter tries a dull thread with telekinesis, like Troisi in I restart from three, while the sleepwalker Karen asks and investigates why the spirits know a lot, but no more than the devil who has a Luciferian face by Willem Defoe, Grand Duke, Lord of the Flies, but when necessary able to transfigure into a malevolent owl. As Agent Dale Cooper teaches, owls are never what they seem. And amidst gender neutrality, workplace harassment is a lawyer (played by Alexander Skarsgård) representing both sides, the series amuses and disturbs. We will not know if pain can ever be our friend. However, we are certain of how decisive the tetrapak can be. And we can only love Lars Von Trier, and these “scoundrels of Danes”.