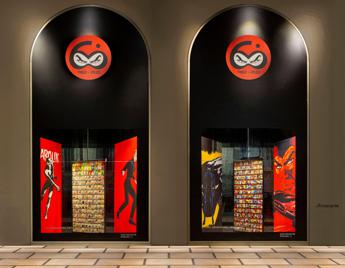 To celebrate birthday, an illustrated book with 365 thousand copies and an in-store event. The CEO of Rinascente Cocchini, “Let’s strengthen the bond with Milan”

One is the longest-lived villain in the history of Italian noir comics. The other is the iconic department store founded in 1865 in Milan. Diabolik and Rinascente together celebrate the 60th anniversary of the king of terror who came out of the imagination of Angela and Luciana Giussani, with an editorial project and a launch event in the Milanese capital. For the occasion, Astorina, the comic’s publisher, has created unpublished pages entitled ‘Colpo alla Rinascente’, in which, playing the role of the CEO of Rinascente, Pierluigi Cocchini, Diabolik sneaks into the Milanese store by robbing the vault at the alongside Eva Kant, with whom the comic book hero shares a life outside the box since the beginning.


“I have been a fan of Diabolik since I was a boy – Cocchini tells AdnKronos -. Two years ago we contacted Astorina to create a unique event. Surely it is an operation that we define ‘out of context’, in the sense that we do not sell comics in Rinascente, however, it is the typical event that reinforces the department store’s bond with the city of Milan. This is not just a place where products are sold or visitors are welcomed but it is a place where things happen. And today we are making something very interesting happen. “. Diabolik, explains Cocchini enthusiastically, “is a very Milanese character, like the Giussani sisters and when we saw the approach of the 60th anniversary we wanted to exploit it, with an initiative that fits well into the life of the city. Diabolik and give him gas and power with a total takeover of the shop “.

The launch of the illustrated book, in 365 thousand copies, was the occasion for tonight’s event, which involved customers and the city of Milan in a live artistic performance. A celebration culminating in the arrival of the cast of the film ‘Diabolik – Ginko Attack!’, The new film by Manetti bros. with Giacomo Gianniotti and Miriam Leone, and a party on the seventh floor of the store. Diabolik and Eva, on the other hand, impersonated by actors-acrobats, completed the shot by descending along the facade of the store with a real show. Outside, the eight iconic Rinascente windows dedicated to Diabolik, covered in recent days by the canvases with graffiti made by the artists of We Run The Streets, have unveiled the collection of 900 issues released in the last 60 years, flanked by iconic images of the protagonists of the comic. Inside the shop, the Air Snake at the Design Supermarket, dedicated to a merchandising offer with celebratory and collectible objects, from collectible lithographs by Facciolo to volumes and ad hoc t-shirts.

“We had planned to do something beautiful and striking and we did it – says an excited Mario Gomboli, director of the Astorina publishing house -. Last February we celebrated the 900th episode of Diabolik, a record in Italy for a comic. Then there is It was the centenary of the birth of Angela Giussani, and now this event. We were looking for some ideas, and when the proposal from Rinascente arrived it was logical that we were enthusiastic: the store is a symbol of Milan, as is Diabolik. faced with this project and satisfied with the ad hoc libretto designed by Riccardo Nunziati: a good result came out. Probably when the Giussani sisters created Diabolik, in 1962, they would never have imagined that today we would have celebrated his sixtieth birthday. But, being Milanese Doc , they would certainly have appreciated that the celebrations were celebrated in an emblematic place of their city such as Rinascente “.