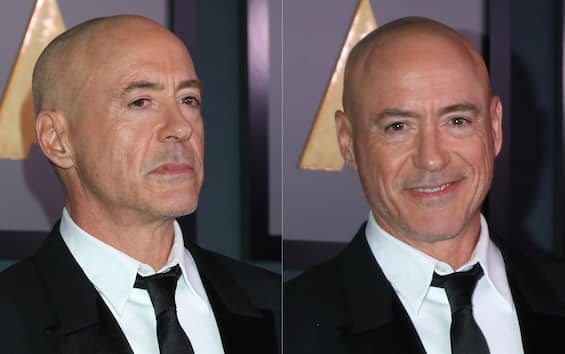 Robert Downey Jr appeared hairless on the red carpet at the Academy of Motion Picture Arts and Sciences Governors Awards in Los Angeles. A not new look for the actor, who has shown himself with shaved hair on several recent occasions. At the Los Angeles event, however, the 57-year-old star appeared with the head almost completely bald: A new look attributable to his involvement in the HBO series The Sympathiser. It was the actor himself, in a video posted on his official Instagram profile, who asked his children to cut his hair to star in the serial, creating a very funny curtain. The look of the interpreter of Iron Man unleashed the fans, who immediately elected him the next interpreter of the DC villain on social media. Lex Luthor.

Robert Downey Jr, why is he bald?

Robert Downey Jr. attended the Academy of Motion Picture Arts and Sciences Governors Awards along with his wife Susan Downey (both pictured below) with hair shaved completely off. The actor is among the stars of the HBO series The Sympathiser and probably has to play the role of a bald character. Downey Jr preferred to cut his hair completely instead of wearing a cap. Not only that: Robert Downey Jr. will be also in the Oppenheimer cast, the new film by Christopher Nolan that will be released next year. Many fans on social media are supporting the actor in an upcoming role as Lex Luthor, the famous enemy of Superman characterized by a completely bald head. But there are also those who have mistaken the star for Jeff Bezos, the CEO of Amazon. The idea of ​​Robert Downey Jr. as Lex Luthor, however, is not new: before being chosen as Iron Man, the actor had been considered precisely for the role of the famous villain in Superman Returnsbut then it was replaced by Kevin Spacey.

Robert Downey Jr, what The Sympathiser is all about

The Sympathiser is a series directed by South Korean director Park Chan-Wook and produced by HBO, in collaboration with A24. The project is inspired by the novel of the same name written by Viet Thanh Nguyen and winner of the Pulitzer Fiction Prize in 2016. The book begins in Saigon (now Ho Chi Minh), in 1975, and tells the story of a Communist sympathizer who, shortly before the end of the war, flees to Los Angeles and infiltrates a group of South Vietnamese to be able to spy on them. With regard to Robert Downey Jr we know that will not play the role of the protagonist, but will have a secondary part. “In order to be able to work on such an important work, such as Nguyen’s Pulitzer Prize-winning book, it is necessary that a real highly visionary team” declared the actor. “Thanks to Park’s direction, I believe that this production will be very creative and challenging not only for me, but also for Susan and for the entire team. As far as I’m concerned, the great opportunity I’ve been given to play a complex role like that of my character will be really inspiring.”