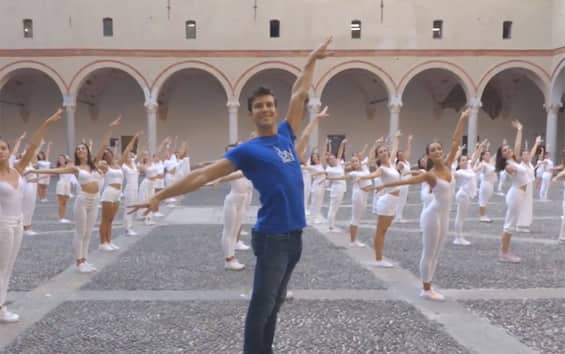 “We finally return to a full edition, without limitations, with a large audience. More than two thousand people are expected for the Final Show at the Castello Sforzesco. And the dance evenings that have been missing in the last two years are also returning because it was not possible to have contact between people ”.
Here we are, by now it is very close to the departure of OnDance, the dance party conceived by Roberto Bolle. And the étoile is radiant a few hours from the beginning of the fifth edition that will bring dance back to the streets and squares of Milan, rediscovering the numbers of the past. Unsurprisingly, the site through which you can book for one of the many free events immediately went haywire due to too many accesses.
Bolle, fresh from a summer tour with his Friends staged at a sold out pace with over 50 thousand attendance, has been able to move the crowds for years now. To bring a very distant public closer to the art of dance. It was with this intention that OnDance was born, which over the years has seen different forms of dance meet under the same star.

So also this year there will be open classes of every discipline, from classical to contemporary dance, from Irish dances to swing, from musicals to break dance to tango. Great news are the meetings, like the one with Luciana Savignano, an icon of dance and unforgettable interpreter of Maurice Béjart’s “Bolero”. Bolle will bring back the “Bolero” (PHOTO) for a Triptych for which he has invited the Béjart Ballet Lausanne (show scheduled at the Arcimboldi Theater from 10 to 17 May 2023).

Then “there will also be a meeting on dance as a cure – adds Roberto Bolle to Sky Tg24 – Dance can be good for people of all ages, not just for kids. Anyone can also benefit the spirit and mind from dance and movement ”.

The White Ball and the appeal to the new government

Great expectations for the White Ball in Piazza del Duomo. On Sunday 4 September at 10 am there will be an en plein air lesson attended by more than 1500 students from all over Italy. All at the bar in front of Maestro Bolle. A suggestive and strong impact scene that comes after the speech in the Chamber of the étoile and the opening of a table at the Ministry. “At Montecitorio they were words, this is a moment made up of powerful images to say that we want a future for these young people in our country, with job opportunities in the world of dance – explains Bolle – The dance table that has been created has produced a document that must be proposed at this point to the new government. The idea is therefore not to let the attention go down but to clearly say that whoever will govern will have to pay the right attention to this issue. The serious proposals of the table are there and will be presented. Il Ballo in bianco will help to say that the world of dance is waiting for answers ”.

The message of peace for Ukraine

Starting from 2 September and for four days, the heart of Milan will therefore return to beating at the time of OnDance, with the thought, however, of the war in progress. Thus it will be the Ukrainian Academy to open the Final Show at the Castello Sforzesco on Monday 5 September.
“The Academy has played a very important role in recent months as a welcome for Ukrainian dancers who have fled the war and who have sought asylum and refuge in our country. He helped them to find accommodation and to continue with the dance which is very important for them also in order not to lose their cultural heritage. There will be a start with them, to pay homage to the Ukrainian artists who are with them right now ”.

The first activities to light up will, as always, be the Openclass, now a symbol of the philosophy and movement of OnDance. From Friday 2 September until Monday 5, from 7.30 to 18.30 at the Cortile della Rocchetta in the heart of the Castello Sforzesco, a succession of styles and dances. We start the day with yoga, pilates and stretching and then continue with all kinds of dance: from the Irish ones (one of the great novelties of this year) to the classical one, passing through flamenco, tip tap and hip hop, the charleston, the dance hall, Caribbean dance, vogueing, afro, and many activities for children.
The first dance evening will be dedicated to tango and will be held at the Cortile della Rocchetta at 9.30 pm on Friday 2 September, preceded by a dedicated open class, from 8.30 pm to 9.30 pm, to “warm up the engines” of the experienced dancers and to give the first rudiments to those who wish to start or just try. The second is dedicated to swing, another great workhorse of OnDance, which will also be held at the Cortile della Rocchetta, but on Saturday evening, September 3, and will be anticipated by a dedicated open class.
Sunday 4 September at 10.00 in the morning Piazza del Duomo will become a large ballroom for over 1500 students of Italian schools who all dressed in white will take lessons directly from Roberto Bolle.

THE ENCOUNTERS ON STAGE and the Final Show

Two exceptional meetings will then take place in what is now the headquarters of OnDance, the Cortile delle Armi of the Castello Sforzesco.

Friday 2 September at 7.00 pm “Dance as a cure“A precious encounter introduced by Roberto Bolle himself and moderated by the choreographer Silvia Gribaudi – who has always worked with dance as an ancestral and primordial language and for this reason connected to the deepest nature of man – to describe areas such as that of Danceability, of Dance Therapy and Dance Well.

On Saturday 3 September, again at 7.00 pm, the meeting between two great characters of dance: the host, Roberto Bolle and Luciana Savignano.

Last act at the Castello Sforzesco with the Final Show. Monday 5 September starting at 9.00 pm lots of music and a compendium of all the dance and all the dances that have alternated throughout the weekend.