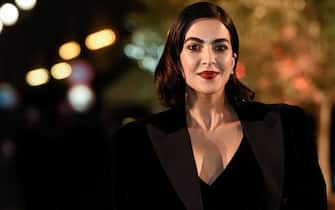 Rocío Muñoz Morales was born in Madrid in 1988. She is an actress, presenter and former model. After taking her first steps in show business at a young age as a professional dancer, she studies to become an actress and debuts in some series for Spanish television.

She began studying dance as a child, and after studying journalism, she attended the acting academy. In 2006 she took part in Julio Iglesias’ world tour, with whom she worked for several years.

Don Matteo, passing of the baton between Terence Hill and Raoul Bova: VIDEO

After the experience as a professional dancer, she began her television career and became popular thanks to her participation as a dance teacher in the Mira quién baila program, Spanish edition of Dancing with the stars.

Terence Hill: “That’s why I leave the TV series to Raoul Bova”

In 2009 she made her debut as an actress in the television series La Pecera De Evaon Telecinco.

All about Raoul Bova

From that moment on, she made herself known as an actress and participated in numerous very successful series, thanks to which she also took part in other projects.

As a model she poses for Elle, Vogue, Woman, Telva, Glamor, Vanity Fair, Grazia or Yo Donna and is the image of brands such as Vodafone McLaren Mercedes, L’Oréal, Nescafé and many others. But her acting is her main road.

In 2012 the actress made her debut in Italian cinema in the comedy Immaturi – Il viaggio, directed by Paolo Genovese. And convict was that set …

Love breaks out between the two and over time leads them to become a happily united couple.

Raoul Bova becomes not only the life partner of the Spanish actress, but also the father of their two daughters.

Telentusosa and eclectic, the actress ranges from cinema to television, from theater to advertising, and in these days she is presenting her first novel entitled “A place of my own “(Sonzogno).

At the same time he starred in the cinema in the film “They Talk” by Giorgio Bruno.

In the film, the actress plays the wife of a suicide, pregnant and suspected of killing her husband.

Following the instinct to move to Italy and build his life here was the right choice.

In the life of Rocío Muñoz Morales, in addition to family and work, there are also those most in need, among the latest charitable initiatives that have seen her protagonist, the one next to Bova in full Covid emergency: she collaborated with the operational unit of the Italian Red Cross to support the homeless.