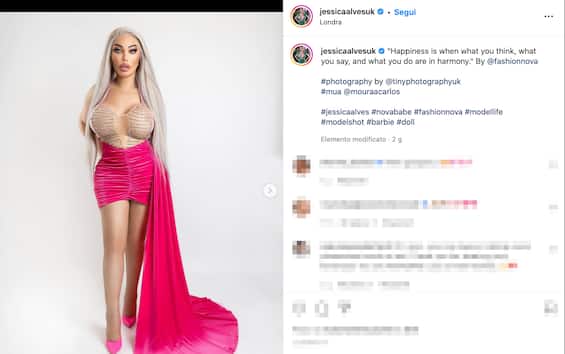 In full boom of Barbie – as the biopic with Margot Robbie and Ryan Gosling dedicated to the most famous doll in history proceeds at full speed – a theme news arrives. This is the completed transformation of Rodrigo Alves, the former Brazilian model who had undergone countless surgeries to look like Ken and who now – after 90 operations which cost him a total of £ 1 million – has completed the transformation into Barbie.

“I think I look good, I feel good and when I wake up and look in the mirror I say thank God every morning,” said Rodrigo Alves (who changed her name to Jessica Alves).
After the various operations to look like the companion of the most famous doll in the world, Alves therefore decided to take a further step, not settling for the supporting role but aiming for the real star of the Mattel house.

In addition to having recently revealed her new physical appearance on social networks, Jessica Alves has told in detail all the process she had to undergo to make the drastic change, doing it exclusively for the US television program This Morning.

You can see the current physical appearance of Jessica Alves in the photos she shared on her Instagram profile, which we show you at the end of this article. After the post with the two photos, we also propose the video showing the shooting.

The words of Jessica Alves

“After so many plastic surgeries, I achieved this look and therefore I look like Barbie. I think I look good, I feel good and when I wake up and look in the mirror I say thank God every morning, ”said Alves, who adds that he feels 95% happy. Why is there still a 5% gap left? He stated it during the guest on the aforementioned TV show, saying that he would still need only one surgical operation to be able to say that he has 100% completed the transformation into Barbie.

It is a nose operation, however the doctors have absolutely advised against it, clearly saying that if he undergoes this operation he will irretrievably lose his nose.

The last surgery that she would miss (but cannot do)

“I had problems, if they touch it now (the nose) will die,” explains Jessica Alves, who turns out to be quite pink from the issue of the nose which – according to her – would not perfectly conform to her expectations in Barbie style.
“If you look at me, it is evident that my nose is ruined. I have undergone more than ten nose plastic surgeries, I have had problems. It was impossible to find a surgeon anywhere in the world who could really fix my nose, ”she said.

But this time he doesn’t intend to risk it, so he admits he won’t touch him with the scalpel. The risk he would run would be to lose his nostrils forever: “They say that if they touch my nose, it will turn black, die and collapse.”

For this reason, the former Brazilian model prefers not to be obstinate and therefore threw in the towel: he stopped with the operations, finally accepting his current physical appearance, although this does not fully satisfy him.

Jessica Alves is happy now, as she clearly writes on IG

Although a vague shadow of dissatisfaction remains, the caption with which Jessica Alves accompanies the photo in which she shows herself in her new Barbie dress suggests that now the former Brazilian model (residing in London for years) is happy with the result. “Happiness is when what you think, what you say and what you do are in harmony”, he writes in accompaniment to two shots that portray her with her new features, in a very short and skimpy dress that makes the main color of the Barbie’s wardrobe: bright pink, what is now called the “Barbie pink”.

You can see the current physical appearance of Jessica Alves in the photos she shared on her Instagram profile, which we show you below. After the post with the two recent photos, we also propose the video showing the shooting.