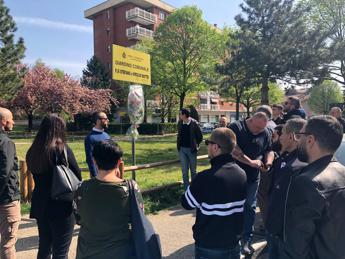 Torino Tricolore remembers the Mattei brothers in the Rivoli garden dedicated to them. “Rivoli dedicated several years ago one of the most important public gardens in the city to the memory of Stefano and Virgilio Mattei, killed on April 16, 1973 in a fire set in their apartment by left-wing militants. Stefano was twenty-two, Virgilio only eight, their fault was that of being the children of Mario Mattei secretary of the local section of the MSI, the real target of the attack – explained Matteo Rossino of Torino Tricolore – at night at least three members of Potere Operaio, including Achille Lollo, set fire to the door entrance of the Mattei family apartment. Stefano and Virgilio were unable to leave the house in time and died, burnt and suffocated “.


“The fire of Primavalle – continued Rossino – was one of the most heinous acts of the ‘years of lead’ and anti-fascist hatred that cannot and must not be forgotten. A few weeks ago in an article that appeared in some newspapers I had read that a local association, ‘L’Obelisco’, had reported to the Municipality of Rivoli that the plaques of the gardens dedicated to the Mattei had to be replaced because they were damaged and illegible. I thus learned of the existence of a public space dedicated to the victims of the Primavalle fire and I thought it essential to organize a commemoration, which I have in mind to propose again every year, so that we do not forget what happened that accursed April 16, 1973. We must remember why certain things no longer happen and this hatred is finally, after years, condemned clearly from the institutions “.