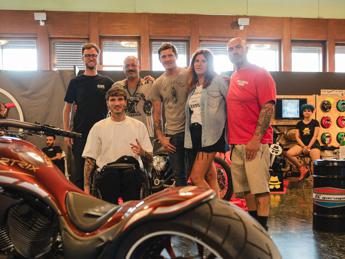 The Eternal city motorcycle show is confirmed as the reference show for the motorcycle scene in central and southern Italy. The sixth edition closed on Sunday 4 September and recorded over 18 thousand visitors, who animated the Palazzo dei Congressi at the Eur in Rome and admired the works of a world of artisans and artists who invent and create new trends and styles to bring and to make art, culture and fashion dialogue. Not only the opportunity to admire the creations of over 150 exhibitors and their over 500 vehicles on display but also the opportunity to test around 100 motorcycles, a demo ride that was a great success.


In addition to the numerous custom artists in action, selected from the best showcases on the international scene, there was no shortage of large motorcycle manufacturers who exhibited the new models. The two days dedicated to motorcycles saw not only live music but also the contest “Kickstart Classic Scooter Contest”, an event within the event and dedicated to vintage scooters and aimed at vespas and lambrettas, and low ride enthusiasts, reserved to chopper, bagger, bobber, club style and Harley-Davidson. There was also “The Eternal Iron”, open to all fans of sports, vintage or modern preparations, cafe racers, scramblers and trackers.

If in the previous editions Eternal City Motorcycle Custom Show had presented the best of the national custom scene, the 2022 event also saw the performances of performers, such as the Lailac association that staged the Masturi dance and the Japanese group Mukaido that did learn about traditional Taiko drumming. Bike shows, shows, entertainment, performances by artists and performers, shopping that have contributed to entertaining a large audience in the name of the passion for two wheels.