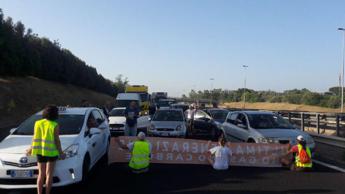 “Ask the government to take suitable measures to combat the ecological and climatic collapse. To prevent millions of people from dying in Italy in the coming years due to heat waves, drought and the consequent lack of water and food”. This is the reason that led the activists of the Last Generation to block again the Gra of Rome on the day of St. Peter and Paul, while some Romans sought refreshment in the scorching temperatures by going to the sea and others went to work.


“At 7:00 – the activists explain – we arrived near the exit 31-32: one of us slowed down the traffic, sounding a whistle and inviting motorists to stop with his hand, while the others formed a human chain,” holding hands. So we slowly and peacefully invaded the outer carriageway, while some motorcyclists whizzed left and right taking advantage of the last available gaps. We then unrolled our banners and sat on the ground, ready to be yanked. Dangerous? Yes , but what awaits us in the coming years is more dangerous if the authorities do nothing to promptly stem the underlying causes of global warming. The road we are taking will inevitably lead us to collapse: we must block it. We must block it together “.

“Our requests are two, they are simple and would allow us to take a first step to combat climate change: immediately stop the reopening of disused coal plants and cancel the project for new drilling for research and extraction of natural gas; proceed with a increase solar and wind energy by at least 20GW this year and create thousands of new jobs in renewable energy, helping fossil workers to find employment in more sustainable jobs. “

The activists also let it be known of an action that was skipped on 27/6: “After the actions of the last few weeks, we were ready to go out on the street again on Monday, June 27. But the road block planned on the Gra was cut off in the bud. a series of stalking, we were stopped by a police car and five of us were taken and detained in the police station for 10 hours “. “The five detained activists were challenged with article 56 of the penal code, the one that punishes attempted crimes, when the road block is a simple administrative block. It is not a crime, especially when it is done only with one’s body. challenge an attempted parking ban on a motorist who slows down in the face of a parking ban. We are absurd “, comments Giulio Giuli.” It is important to remember that the activists of the last generation have always acted in a non-violent manner, passively resisting the violence of some citizens and the intervention of the police. Together with the long hours spent in vain at the police station for investigations, these complaints have the sole purpose of intimidating and frightening people who are too terrified of climate collapse to be afraid of these repressive means ”, concludes Giuli.