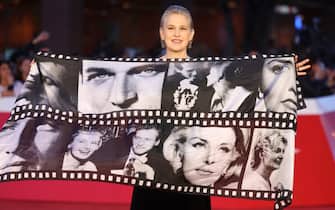 One of the first guests to appear in the spotlight is the daughter of art Melissa Newman, daughter of the two Hollywood legends Paul Newman and Joanne Woodward, showed a shawl that reproduces the couple’s iconic images. In fact, the new docu-series will be previewed at the Rome Film Fest The Last Movie Starsdirected by Ethan Hawke and produced by Martin Scorsese, which paints an intense portrait of the two stars

The red carpet of the film that tells the life of Marco Carrera, The Hummingbirdbetween fatal coincidences, losses and absolute loves, it also hosted the French actor and director Louis Garrel

Cannes 2022, the red carpet of the film The Innocent by Louis Garrel

Elisabetta Sgarbigeneral manager of La Nave di Teseo, shows a copy of the novel The hummingbird by Sandro Veronesi, winner of the Strega Prize in 2020

Il Colibrì, an exclusive clip from the film with Pierfrancesco Favino

At the Rome Film Fest the director James Ivory94 years old, author of masterpieces such as Room with a view And What remains of the day, received the Lifetime Achievement Award

THEl Hummingbird it is the story of the ancestral force of life and the strenuous struggle we all make to resist what sometimes seems unsustainable. The gorgeous actress Benedetta Porcaroli she plays Adele, Marco’s beloved daughter who passes away prematurely

18 gifts, the cast of the film with Vittoria Puccini and Benedetta Porcaroli

Pierfrancesco Favino plays the protagonist Marco Carrera, who an implacable destiny subjects to very hard tests and who, just like a hummingbird, flaps its wings tirelessly to remain motionless in the same place, anchored to life. “I don’t think he is an immobile man, he is defined as such by others: it is a very expensive energy activity that of wanting to remain anchored to the things you love”, said the actor.

In the movie Sergio Albelli plays Marco’s father. In fact, history proceeds according to the strength of memories and jumps from one era to another in a liquid time that goes from the early 1970s to the near future.

The Colibrì by Francesca Archibugi opens the Rome Film Festival

The songs of the Hummingbird, a musical journey in the book by Sandro Veronesi

An unpublished piece by Sergio Endrigo and Riccardo Sinigallia appears in the soundtrack of the film signed by Battista Lena, Dear faraway love, also sung live by Marco Mengoni at the end of the official screening. “The key word for everyone was terror and fear of doing something wonderful. I am honored to be part of it too with a piece by Sergio Endrigo, for me one of the pillars of Italian music. I arranged the piece a bit to make this beautiful film close properly ”, explained the artist

Marco Mengoni, now the sports halls then brings Materia (Leather) to the stadiums

The protagonist also faces the mental distress of his wife Marina, played by the beautiful Kasia Smutniak who tried to “understand her, forgive her and love her without asking too many questions: Marina is a person who lives stuck in a pattern, which foresees a search for desperate happiness through what society proposes to us women, only through love, family, children, work, home ”

Kasia Smutniak on Vitiligo: “I’m from God, nothing but sad story”

Kasia Smutniak on the red carpet with her daughter Sophie, had by Pietro Taricone

Domina, announced the second season of the series with Kasia Smutniak

At the seaside, as a boy, Marco met the beautiful Luisa Lattes, played by Bérénice Bejoand all his life he will burn with love for her

“I have known Sandro Veronesi for 30 years as a writer, and I read this novel the day it came out. It is a book that upset me a lot, but making a film of it was a proposal by Domenico Procacci and Veronesi himself. proud and afraid, because the impression I had is that it was a novel capable of touching all the themes that are dear to me, as if it were a book written by me but written better, of course “, declared the director Francesca Archibugi

Nanni Moretti plays Daniele Carradori, Marina’s psychoanalyst who teaches Marco to welcome the most unexpected changes of course to protect himself from the most violent shocks. “It was great for me to be just an actor. It is the sixth time in 30 years that Francesca has asked me to play a role, at one point I wanted to say yes. The book was beautiful, the character too, ”said the artist

The jury of the complete Progressive Cinema Competition: the directors Pietro Marcello And Juho Kuosmanenthe Iranian director and cartoonistto Marjane Satrapi (who since the beginning of October has participated in the protests in solidarity with Iranian women) and the actor and director Louis Garrel

Geppi Cucciari presented the inaugural ceremony, which opened with the awarding of the Lifetime Achievement Award to James Ivory and during which a minute of silence was held in memory of Mahsa Amini