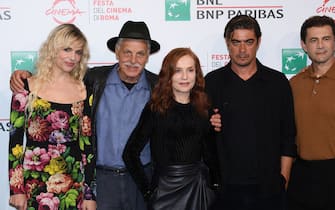 “The shadow of Caravaggio”Comes to Rome Film Festival. Today, Tuesday 18 October, is the day of the film directed by Michele Placido and presented in the Grand Public section in the Sala Sinopoli. The film will be released at the cinema on November 3distributed by 01 Distribution

WATCH THE VIDEO: Rome Film Fest, The Shadow of Caravaggio by Michele Placido

The film is written, directed and performed by Michele Placido: after fifty years of career and four years of work on the project, he signs his fourteenth film as a director

Caravaggio: 5 films dedicated to the artist and his works

The cast of the film to the Rome Film Festival

All the news on the Rome Film Fest

For this movie Michele Placido has taken up an idea that dates back to 1968: when, on arriving in Rome, he attended the Academy of Dramatic Art

The shadow of Caravaggio, shooting of the film by Michele Placido

To tell the life of Michelangelo Merisi known as Caravaggio from an unprecedented perspective, invents a character, that of the Shadow (Louis Garrel, pictured): an investigator who spies on the painter on behalf of Paul V and must verify his orthodoxy

Riccardo Scamarcio plays the role of Caravaggio. Placido’s Caravaggio is not only an ante litteram rock star and a cursed genius, but also a rebel against a power that cannot accept his urgency for truth. “Your paintings insinuate doubt and in this historical period the Church cannot afford it”, says the inquisitor to the artist in the final scene.

Riccardo Scamarcio, yesterday and today: how the actor has changed over the years

“There are many points of contact between me and Caravaggio. For example, that of being two provincials and then both having arrived in Rome moved by an authentic passion. It was Michele Placido himself, however, who gave me the inspiration, I saw in him a fever, an urgency that he transmitted to me. I saw Caravaggio a bit like an Elvis Presley, a provincial boy to whom I wanted to give that same fever that I have when I get excited “, he said. Scamarcio

Also in the cast Micaela Ramazzotti

Micaela Ramazzotti, the most beautiful photos of the actress

There is a search for authenticity in the film which is evident not only in the story but also in the choice of locations, in the scenographic reconstructions, in the costumes and in the sophisticated techniques used to reproduce famous paintings. In the caste too Vinicio Marchioni

Also in the cast is Isabelle Huppert and Lolita Chammah (in the photo): mother and daughter in life, one interprets the painter’s noble protector, the other the prostitute Anna Bianchini, his great love

Oragravitya duo formed by Umberto Iervolino and Federica Luna Vincenti (in the photo with Placido), signs the soundtrack of the film

The best movies with Micaela Ramazzotti