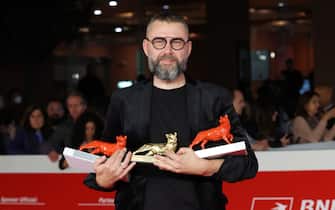 Awards for Best Film and the Best Director at the 17th edition of Rome Film Festival for January by Viesturs Kairišs (in the picture)which also wins the “Vittorio Gassman” Prize al Best Actor with Karlis Arnolds Avots. There Best Actress is Kim Kum-Soon for Jeong Sunwhich also won the Grand Jury Prize

WATCH THE VIDEO: Romulus II at the Rome Film Fest

There ceremony award ceremony for films Progressive Cinema Competition took place in the Sala Petrassi of the Auditorium Parco della Musica Ennio Morricone with the conduct of Geppi Cucciari (in the picture). The jury was made up of the director and cartoonist Marjane Satrapiby the actor and director Louis Garrelby the directors Juho Kuosmanen And Pietro Marcello and the manufacturer Gabrielle Tana. Here you are all awards that have been awarded

The special on the Rome Film Fest

Rome Film Fest 2022, the most beautiful looks seen on the red carpet. PHOTO

Rome Film Festival, Sean Penn’s son: “I used to make pizzas. Better to be an actor”

Russell Crowe supports Lazio: the announcement at the press conference of “Poker Face”

The Award for the Best Screenplay was assigned to Ramona by Andrea Bagney. (In the photo the protagonist Lourdes Hernandez)

Special Jury Prize for Best Photography a Foudre by Carmen Jaquier. Mention Special of the Jury to the actress Lilith Grasmug (in the picture) for the same film

Also this year the spectators were protagonists with the assignment of the Public Award FS among the titles of the Progressive Cinema Competition. Announced by Valerio Mastandreathe recognition went to SHTTL by Ady Walter (in the picture)

The “Ugo Tognazzi” Award for Best Comedy He went to What’s Love Got to Do With It? by Shekhar Kapur (in the picture). Special mention a Ramona by Andrea Bagney. The award was awarded by a jury chaired by Carlo Verdone and composed by the actress Marisa Paredes and by the author and actress Teresa Mannino

Causeway by Lila Neugebauer won the Best First Feature BNL BNP Paribas Awardconferred by a jury chaired by the director and screenwriter Julie Bertuccelli and composed by the director Roberto De Paolis and by film critics Daniela Michel. Mentions special for Ramona by Andrea Bagney e Foudre by Carmen Jaquier. (In the photo the protagonist of “Ramona”, Lourdes Hernandez)