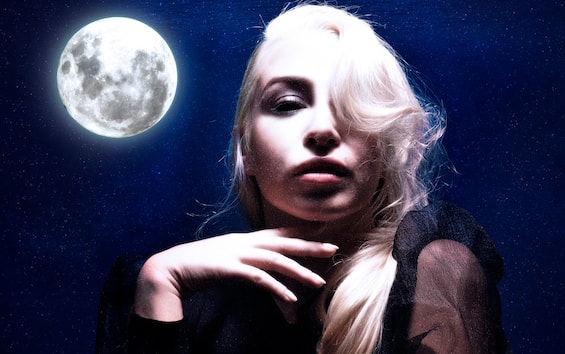 Werewolf is the new single from Romina Falconi (Freak & Chic and distributed by ADA Music Italy) and will be part of Heartbreak, the third album by the singer-songwriter to be released in 2023: a gallery of sinners, “wrongdoers”, a collection of characters and personalities, a story that overturns the dogmas of the Italian pop song. As happened with the literary debut last May, the music continues to be accompanied by the special metal book Rottocalcountil November 1st available in exclusive preview at Lucca Comics & Games 2022at the Freak & Chic (Games Pavilion) and Poliniani (Authors Pavilion) stands. Rottocalco Vol. 2 Werewolf is a literary and printed story of over 230 pages in which the macro themes of Werewolf: the howls in the void, the toxic positivity and the damnation of the impostor.


Romina let’s start from Werewolf: why this single and why now?
Every three months I publish a song with a precise shadow of the gallery of sinners that will populate the disc. Liquid music does not last long compared to the past and I want each song to breathe and the shadows to be praised as much as possible. They live the peak of the problem I don’t know if they will make it but I like to tell about their empathy. I focus on the interrupted.
The nun And the werewolf are they both lost? And in your opinion, if the nun catches God, what does he say to him?

She is a betrayed person who sees black and says that to the next betrayed love she consecrates herself to Christ. She is an apparent victim, anyone who suffers a betrayal is a victim and she takes revenge. It is, her, a hysterical fit. The Werewolf he has a sorrow and every day he wears the mask to face the world. She never asks for a serial traitor again, the Wolf asks for divine intervention cursing.
Music, but also literature and cinema, have often given space to the least: you dedicate your art to those who were born wrong, which is not necessarily a negative meaning. What fascinates you about them?

I am the first to be wrong, I try to bring water to my mill. I was a weird little girl from a dysfunctional family. I was dealing with a person who exhibited mood swings and I exorcised her by being a rogue and hiding her negative feelings: this is the impostor syndrome. To be honest, I mainly remember the defects of those who did me good.
Blaise Pascal said: to bet on God you lose nothing, if you find him you win the Faith if you don’t find him you lose nothing. Share? On the other hand, are you a believer?

I believe very much in God otherwise I could not name him, sometimes I think he overestimated me and mistaken me for a super Romina.
You also say that God is not a fan of happiness: is it true that God does not exist to help us choose but to help us bear the weight of our earthly choices?

With all due respect, and whatever we want to call it, there is the figure of the fetishist of free will, who comes before the children and the drowned dead. You expect protection from power.
Do you believe that humanity today has the same werewolf mask that crumbles in moments of loneliness?

I’ve had it since birth, I’m a nerd who has done therapy and gets to the bottom of things. Our life is a continuous job interview or a continuous first date. The value of the sentence that the beauty is yet to come lies in its incompleteness because if after three encounters I already know everything about a person, I lose the poem.
A world that thought and now no longer thinks: are we today? Do you think there is a moment when the world has stopped thinking?

They failed to keep their promises. We don’t have a better world today. In the past they have made revolutions thinking about their own interests and not about the future. The Berlin Wall has collapsed and many have taken rubble home with them: and I wonder what has changed. Everyone thinks for himself and it is failure.
Tell me about your last fucking dream? And have you discovered what an artist dreams of?

I will never feel like an artist, I will always be a woodcutter even if I still play music and I light a candle to the Madonna. I don’t know what you dream of an artist because you have to be a little neurotic. Dreams de ca ** o serve to make people feel less alone; I feel like this, I feel like a crater but it is also a way to survive. I realize that people add up when I write about my flaws.
Is this a really hopeless song? Or is there a sprout between the lines? Moreover, today the wolf is said to be alive and the wolf is not killed.

The only hope is that the person realizes they have a problem. If you know that there is a problem you are already halfway there, said Freud, while that hope is a rip-off, Monicelli argued. The singer-songwriter has to follow his biography so to make a cool record you have to do the life of Rambo. Depression is being a prisoner of the spell, it is being a broken puppet.
What do you think about the invasion of the politically correct?

We can’t take it anymore. In my opinion, indignation is in vogue, which sells as much as sex. Art must not have censorship.
The Werewolf is the protagonist of many fairy tales: which is your favorite? And which one would you never tell your children?

I tell my grandchildren all invented fairy tales because I was scarred by Little Red Riding Hood. Fairy tales are terrible. The wolf is not enough in itself and if it crosses a certain line the monster comes out. There is also a lycanthropy syndrome. I was born in Torpignattara but I am analytical and I analyze the shadows in an anthropological way.
What about Rottocalco?

I wanted to describe the shadow of each heartbreak: but three minutes is enough to describe a shadow in the depths? So I analyze them because the purpose is to examine the shadow without mocking it, we should all go to therapy also to get to know each other. There should be no hidden shadows under the rug.
Finally, waiting for the record in 2023, what will happen? Other singles, other projects? I know you’re back on tour with Immanuel Casto.

I thought I was known as a singer-songwriter and I wondered if someone would take my book and I arrived, with surprise, almost a thousand copies with volume 1. Things must be done well. Yes, I’m back on tour with Immanuel, we are brothers and we have built our destiny, we have created Freak & Chich. As a surprise, I’m thinking of a quick Christmas song.