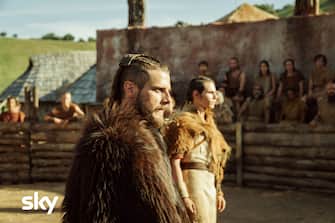 WATCH THE VIDEO: Romulus II, the formation of Rome

The city is consecrated to the goddess Rumia

Titos, king of the Sabines, learns of Rome from two slaves who have fled to seek freedom and are captured. After questioning them he pretends to free them, but as the two flee he kills them

Romulus II, the characters of the new season. VIDEO

Titos invites Yemos and Wiros. The Sabine priestesses invoke the god Sancos. The leader of the priestesses advises Titos to hit Rome when she is still “the cub of a wolf”, not to wait until she is too big

Romulus II, the cast tells the secrets of the new season. VIDEO

Yemos and Wiros arrive at the Sabine city and are greeted by Sabos, the head of the holy guard. The first priestess disarms the women of the expedition to participate in a religious ritual

Romulus II, all there is to know

Titos offers an alliance between Rome and Cures but provokes Wiros about his origins by refusing to recognize his role as king alongside Yemos. The two, however, reject the provocations and reaffirm the royalty of Wiros in words and deeds

Deftri is chosen by the Sabine priestesses to become the wife of the god Sanctos, be queen for a day and unite the two peoples. During the rite, she is killed by Titos

Before the ritual to unite the two peoples, Wiros is drugged by Titos

Titos asks Wiros to sacrifice the life of a child by showing him the lifeless body of Deftri. Wiros, however, hits Titos, who orders his soldiers to kill him

To allow the Romans to escape, Ilia takes some Sabine priestesses hostage. Titos orders his men to lay down their arms and lets the Romans go, then orders to rally the army to attack Rome

The Romans gather in prayer for Deftri’s funeral. Wiros threatens kidnapped Sabine priestesses and is stopped by Yemos

News from Alba reaches Yemos about the intentions of the Sabines. Yemos leaves to meet Titos but prepares the army for battle and asks Ilia to go with him

Yemos arrives in Alba and goes to visit Numitor. The king of Alba is in bed, seriously ill after the dissolution of the league of thirty. Silvia presents the reasons of the Sabines to Yemos asking him to make an effort to find an agreement and keep the peace

The other kings are summoned by Wiros to create a defensive alliance against the Sabines. To convince the other kings, Wiros asks Lausus for help

Ilia goes to the priest of Mars to ask him to support them in case of war with the Sabines, but he refuses

Yemos and Titos meet outside Alba. Titos demands the release of the priestesses taken hostage, Yemos in exchange wants an apology for the deception into which she had lured them. But Titos refuses to apologize and declares war on the Romans

Silvia blames Yemos for provoking the Sabines. And Yemos disowns her as a mother

Lausus manages to convince the other kings to ally with Rome, but when they discover the priestesses they ask Wiros to have them in exchange for their military support. Wiros, however, wants to keep his word and drives out the 5 kings, breaking the alliance in the bud

Yemos kisses Ilia in front of Enitos’ grave, she walks away and confesses that she lied to him: Amulius is still alive

The Sabines attack Alba while Yemos and Ilia reconcile by seeing a future together and make love. Amulius enters Numitor’s room and kills him, then sits on the throne of Alba