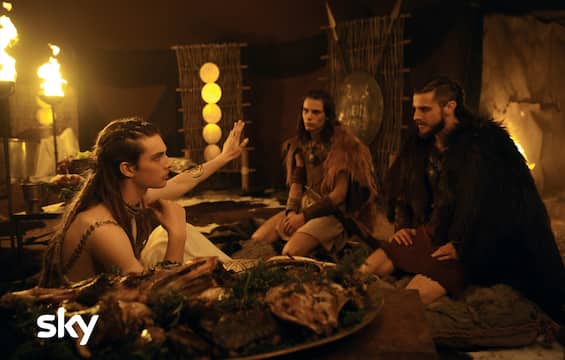 New cities, new peoples, new kings: the second, even more epic season of Romulus, produced by Sky Studios, Cattleya and Groenlandia, starting today exclusively on Sky and streaming only on NOW (THE SPECIAL). Previewed at the seventeenth edition of the Rome Film Fest, Romulus II – The war for Romethe second chapter of the Sky Original series signed by Matteo Rovere, will be broadcast every Friday on Sky Atlantic and will obviously be available on demand.

The birth of Rome as it has never been told in eight new episodes – shot like the previous ones entirely in protolatin – will reach the heart of the founding myth of Rome, with the protagonists of the first season, Andrea Arcangeli (Yemos), Marianna Fontana (Ilia) and Francesco Di Napoli (Wiros), with the addition of Valentina Bellè (I wanted to be a rock star, The Labyrinth Man, Catch-22) in the new episodes as Ersilia, head of the Sabine priestesses; Emanuele Maria Di Stefano (The Catholic School, Drought) who plays the king of the Sabines Tito Tazio, son of the God Sancos, the most powerful enemy of Rome; Max Malatesta (Favolacce, Il primo Re) is Sabos, adviser and right arm of the king of the Sabines; Ludovica Nasti (The brilliant friend) plays the role of Vibia, the youngest of the Sabine priestesses; while Giancarlo Commare (Skam Italia, Male singular, La Belva) is Atys, the young king of Satricum. Vanessa Scalera (Silvia), Sergio Romano (Amulius) and Demetra Avincola (Deftri) also return.

In the first two of the new episodes, shot respectively by Matteo Rovere and Enrico Maria Artale, Yemos and Wiros, sons of the Lupa and brothers by choice and by destiny, found Rome together with Ilia, Deftri, the entire people of the Ruminales and a large number of Latins looking for a new beginning and a new homeland.

The two are proclaimed king of the city that stands in the place of the old Velia. Rome is a city founded not on blood and revenge, but on justice and peace, a promise of brotherhood and social redemption for all. In all territories only their deeds are spoken of, so much so that the rumor reaches up to the cruel king of Cures, Tito Tazio, who invites the two brothers to the land of the Sabines. The invitation proves to be an ambush that leads to the kidnapping of the Sabine priestesses.

Wiros welcomes the four kings of the adjacent peoples to ask for their support against Tito Tazio, but the meeting does not go as hoped. The latter, encamped with his soldiers on the borders of Alba, in exchange for peace, asks to have his priestesses back, taken prisoner by Yemos and Wiros during the ambush, but without success. Although Silvia begs the Sabines not to attack her son, Tito’s advance does not stop.

Filippo Gravino and Guido Iuculano return to the screenplay, joined in the writers’ room by Flaminia Gressi and Federico Gnesini.

Romulus II – The war for Rome is the first Italian TV series certified carbon neutral. During the production phase, the strict Zen2030 protocol was adopted, an Italian benefit company that aims to reduce the environmental impact of the entire Italian audiovisual sector, on the path of net zero emissions. A choice in line with the commitment of the Sky group which, with the Sky Zero campaign, aims to be the first media company in Europe to become Net Zero Carbon by 2030.