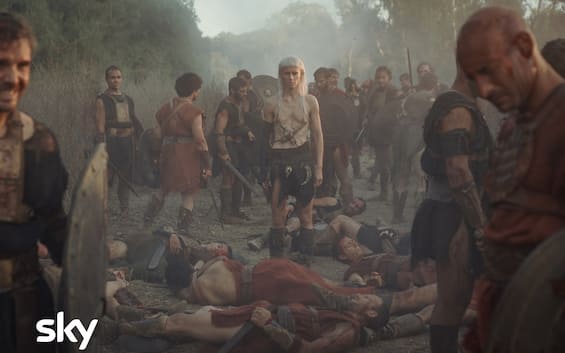 The war waged by Tito Tazio in Rome has now reached its peak. The king of the Sabines arrived at the gates of the city alongside the Latin kings, his new allies: the clash promises to be decisive, as well as one of the bloodiest and most spectacular that Italian TV remembers. Back with fifth and sixth episode Romulus II – The war for Romethe series produced by Sky Studios, Cattleya and Groenlandia, from Friday 4 November on Sky Atlantic and streaming on NOW (the episodes will obviously also be available on demand).

The cast of Romulus II – The war for Rome

In eight episodes shot like the previous ones entirely in protolatin, Romulus II will arrive at the heart of the founding myth of Rome, with the protagonists of the first season, Andrea Arcangeli (Yemos), Marianna Fontana (Ilia) and Francesco Di Napoli (Wiros), to which in the new episodes are added Valentina Bellè (I wanted to be a rock star, The man of the labyrinth, Catch-22) in the role of Ersilia, head of the Sabine priestesses; Emanuele Maria Di Stefano (The Catholic school, Drought) who plays the king of the Sabines Tito Tazio, son of the God Sancos, the most powerful enemy of Rome; Max Malatesta (Bad Tales, The first King) is Sabos, adviser and right hand of the king of the Sabines; Ludovica Nasti (The brilliant friend) plays the role of Vibia, the youngest of the Sabine priestesses; while Giancarlo Commare (Skam Italy, Masculine singular, The beast) is Atys, the young king of Satricum. Vanessa Scalera is also back (Silvia), Sergio Romano (Amulius) and Demetra Avincola (Deftri).

THE ADVANCES OF EPISODES 5 AND 6

In the fifth and sixth episode of Romulus II, Yemos and Wiros, returning to Rome, face the lack of food in the village. Wiros orders to take the salt hidden in the enclosure dedicated to the goddess Rumia, but not everyone agrees with him. Tensions result in a terrible confrontation. Meanwhile in Alba the Latin kings declare loyalty to Titus who repays them in an unexpected way. As the Sabines march towards the enemy city, Rome prepares for battle with the entire army lined up at the gates. A tough fight begins. Right on the field, Yemos sees the Lupa appear and decides to follow her advice. This choice will change the relationship between the two brothers and push Yemos to take drastic action. Meanwhile the priestesses run away, except Ersilia.

Filippo Gravino and Guido Iuculano return to the screenplay, joined in the writers’ room by Flaminia Gressi and Federico Gnesini.

Romulus II – The war for Rome is the first Italian TV series certified carbon neutral. During the production phase, the strict protocol of Zen2030 was adopted, an Italian benefit company which aims to reduce the environmental impact of the entire Italian audiovisual sector, on the path of net zero emissions. A choice in line with the commitment of the Sky group which, with the Sky Zero campaign, aims to be the first media company in Europe to become Net Zero Carbon by 2030.