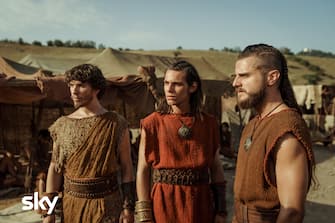 Yemos has returned and is welcomed by the people. Wiros is back too and is received with the same enthusiasm. Yemos says that two Romans died during the journey, three others, including Ilia, are missing, so he asks to stop celebrating and go home to pray

WATCH THE VIDEO: Romulus II, episode 5: the return of Yemos

Romulus II, the photos of the first two episodes

The soldiers, who do not know she is his daughter, intend to abuse Ilia, but Amulius pushes them away by taking the girl

Romulus II, the photos of episodes 3 and 4

Rome has welcomed refugees from Velia but does not know how to feed them. The city is full of killed cattle that are rotting but the only salt to dry it is the one sacred to the goddess Rumia. Yemos and Wiros decide to use it but Tarinkri refuses

Romulus II, the characters of the new season. VIDEO

Amulius tells Ilia about his escape plan to be able to build a new life with his daughter, away from everything and everyone, then puts her to sleep

Romulus II, the cast tells the secrets of the new season. VIDEO

Ersilia meets Wiros and asks him if he is a god. He tells her that he is a man and that he is bleeding. She confesses that she almost poisoned him and she reveals that she thinks he is the god she was destined for since she was a child. Wiros, however, rejects the idea

Romulus II, what you need to know

Despite being injured and drugged, Ilia manages to escape from Amulius’ tent, but he stops her and captures her in the woods. At the end of a hard fight with her father, she Ilia swears to him that one day she will kill him

Titos has all the kings of the cities killed who have turned their backs on Rome, swearing allegiance to him. To kill Lausus is Amulius, who then frees Ilia

After reflecting on Ersilia’s words, Wiros agrees to be a god and makes love to her. Titos reveals to Silvia that he had the other kings killed for her, then invites her to sleep next to her and announces his intention to attack Rome the next day.

Yemos and Wiros show the first differences on the strategy to be taken against the Sabines. Wiros wants to face them in the open field, Yemos, who continues to have visions of the She-wolf, would prefer to wait for Titos’ army inside the walls of Rome. He then proposes to free Tarinkri and the others to fight them too

The Sabines march towards Rome and are ambushed by the Ruminal archers, then they are attacked by the army led by Yemos, Wiros and Ilia

During the battle, Ilia meets her father’s gaze and challenges him. At the end of a long duel, Amulius seems to have the upper hand, but his fatal blow is stopped by the intervention of the priest of Mars

At the end of a long duel, Amulius kills him

Ilia, recovered and rose from the ground, kills Amulius. Titos also goes into battle to support his army

Yemos has another vision of the she-wolf, who tells him to save the ruminales, so he orders a retreat. Wiros, however, refuses and orders to continue fighting, before deciding to retreat and concede victory to the Sabines

Upon returning to Rome, the break between Yemos and Wiros is consummated. Renneis asks Wiros to take the lead, he asks Yemos why he ordered the retreat, accusing him of showing weakness. Yemos, however, claims to have done only the will of Rumia and abdicates, leaving Wiros as the only king

The Sabine priestesses flee Rome and return to Titos, but Ersilia chooses to stay with Wiros, who is determined to fight back. But Titos is also ready to besiege Rome