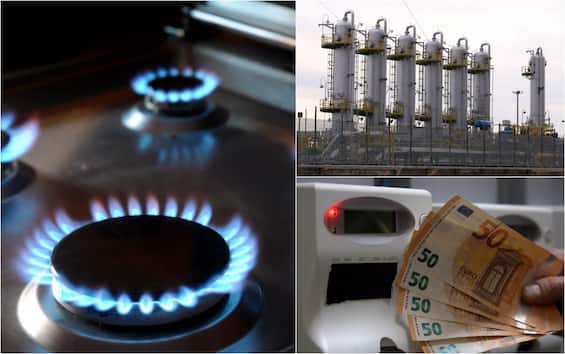 The various hypotheses to reduce the price of natural gas, on which political parties are dividing. A cap has been introduced in Spain and Portugal, but this is a different case from Italy. THE SKYWALL

Political parties were divided on the solutions to reduce the weight of the gas price on the bills of Italians. At the Rimini meeting Enrico Letta and Giorgia Meloni proposed different mechanisms to introduce a cap on the price of gas.

Read he stated that the Democratic Party proposes that we proceed at national level, in the absence of an agreement in Brussels: “we must intervene so that there are prices administered in Italy for 12 months and a ceiling on electricity, gas and energy bills because this is the only way to stop the growth of bills, to do this is to intervene with an intervention of the law “. Giorgia Meloni instead she said she was more cautious and preferred a European solution: “I am very much in favor of the price cap, at a European level. Be careful to impose the price cap at the national level, because the companies we say produce this gas are not public companies, unless we want to nationalize them and we can talk about them. They are listed companies and therefore they sell it for 600, they don’t sell it for 100 “.

What is the Amsterdam gas exchange

To understand the different positions we must first explain what we are talking about when discussing the price of gas. Energy companies sign methane supply contracts between themselves, in which sales prices are agreed. However, for traders who want to buy gas outside of these contracts, there is a so-called “spot” market, the most important example of which is the Amsterdam stock exchange where the Ttf (Title Transfer Facility) is formed, the reference index of the European gas. A market that is defined by many as “speculative”, but which also affects our bills. According to Arera, in fact, about 70 per cent of Italian supply contracts provide for an update to the Ttf, which therefore affects sales prices. Even the price of the raw material itself in the protected market has until now been directly linked to the values ​​traded on the Amsterdam stock exchange.

Because the price of gas affects the cost of all electricity

The price of gas negotiated in Amsterdam then very often determines the cost of electricity. This happens for the so-called marginal price mechanism, which characterizes all commodity markets. Basically what determines the price of electricity is the energy source that contributes to satisfying the demand that other sources are unable to cover, that is to say the most expensive. Let’s assume that renewable energies are able to guarantee 60 percent of the electricity required in the course of 24 hours: to cover the remaining 40 it will be necessary to burn natural gas in thermoelectric plants. And gas will determine the single selling price of electricity: if it were sold at a lower price, gas producers would stop burning it because it would not be cheaper, while other companies – in the field of renewables – would be knowledge of being able to raise their demands up to the price requested by the methane producers. And here, then, that those who buy electricity will not be able to offer less than the price requested by those who burn gas, even if – as happens today – this is much more salty than the rest of the energy mix.

The alternatives for introducing a gas price cap are different. The first is the one on which the Draghi government has been pushing for some time, but at the Rimini Meeting it was said to be pessimistic on this point: to impose a maximum price that energy companies that import gas into Europe would be willing to pay. The problem, according to critics, is that this could cause a reduction in gas supplies to Europe, as exporting countries would see the price at which they sell methane drop. This could be achieved through lengthy renegotiations, or with a unilateral violation by the European side which, however, would probably have serious repercussions.

For an alternative we must look at the Iberian case. Spain and Portugal have in fact introduced a national compensation mechanism since May that resembles a ceiling on the price of gas.

The threshold was provisionally set at 40 euros per megawatt hour: if the Spanish and Portuguese energy companies buy gas at higher prices – in these hours on the Amsterdam stock exchange it is trading at almost 300 euros per megawatt hour – they are compensated daily by the state. A mechanism that applies to the gas that is burned to generate electricity. In this way, the price of electricity also falls, which in Spain costs less than a third of what is sold in France, Italy and Germany, since – due to the mechanism of the marginal price – the value of gas also determines that of electric energy.

However, this is not a cost-free operation. Spain and Portugal will pay € 8.4 billion to energy companies to cover the difference between the cap and the market price. And they had to ask the European Commission for authorization to set up the compensation mechanism, since the electricity market is uniform throughout the EU.

Authorization that came only because the Iberian Peninsula is considered a sort of “energy island” independent from the rest of the continent. The interconnections with France are in fact minimal, in terms of gas pipelines and pylons. If this were not the case, the Spanish and Portuguese subsidy would affect the entire European electricity market, among other things providing low-cost electricity to the French thanks to the money of the Iberian taxpayers.

On the other hand, Spain and Portugal have found a mechanism of this type convenient because they use little gas to generate electricity. Certainly less than Italy: if therefore the next government introduced a national ceiling of this type to the public budget it would cost more, between 30 and 40 billion euros. Money that should be paid by the same taxpayers who would then enjoy the discounts on the bill.

The cut in consumption

One way to reduce gas prices over time that according to most experts could be more effective and less problematic would be to reduce consumption. In this way, European energy demand would slow down, reducing the imbalance with supply.