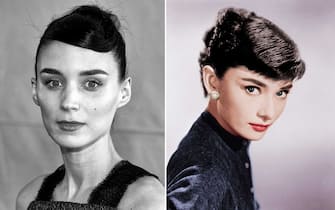 Audrey, the biopic with the screenplay by Michael Mitnick and directed by Luca Guadagnino, will be made by Apple. The film will tell the story of the English diva, an icon of elegance, an unforgettable interpreter of films such as Breakfast at Tiffany’s And Sabrina. To give the face to Audrey Hepburn will be Rooney Mara

In the cast of Audrey also Tom Holland and Chris Evans, who will play two other Hollywood legends: they will be Fred Astaire and Gene Kelly respectively.

Rooney Mara was born on April 17, 1985 in Bedford, New York, Rooney Mara achieved international consecration with the role of Lisbeth Salander in Millennium – Men who hate women (2011), for which she was nominated for a Golden Globe and Academy Award for Best Actress. He then starred in the thriller Side effects (2013), in the independent drama Without saints in heaven (2013), and in the romantic film She (2013).

60 years ago Breakfast at Tiffany’s was released with Audrey Hepburn. PHOTO

For his performance in Carol (2015) won the Prixinterprétation féminine at the Cannes Film Festival, and received her second Golden Globe and Oscar nomination in the Best Supporting Actress section

Audrey Hepburn, a TV series about her life

Rooney Mara has been linked to Joaquin Phoenix since 2016. In September 2019 they formalized their engagement. A year later, in September 2020, their first child, River, was born, named in memory of Joaquin’s older brother, who died in 1993 at the age of 23.

Like Audrey Hepburn, Rooney Mara has never neglected social commitment in her career. The actress is in fact founder of “Faces of Kibera”, a charity foundation created in favor of the orphans of the slums of Kibera in Nairobi in Kenya

Audrey Hepburn, the most iconic phrases of the actress

Audrey Hepburn is still today, almost 30 years after her death in 1993, one of the most fascinating women, an icon of class and style, but also an unforgettable actress, star of films such as Roman holidays, Sabrina And My Fair Lady, just to mention the most famous ones

Audrey Hepburn: the photos of the unforgettable actress

Winner of two Oscars, three Golden Globes, one Emmy, one Grammy Award, four BAFTAs, two Tony awards and three David di Donatello awards, Hepburn was one of the leading figures in American cinema of the 1950s and 1960s. . Hepburn was named third biggest star in film history by the American Film Institute and has her own star on the Hollywood Walk of Fame.

Call me by your name, 6 curiosities about Luca Guadagnino’s film

Audrey it will be directed by Luca Guadagnino, who won an Academy Award as a non-original screenplay for the film Call me by your name. The screenplay is by Michael Mitnick, who previously collaborated with Guadagnino on the 2019 short film The Staggering Girl

The rise of Luca Guadagnino: from The Protagonists to Suspiria