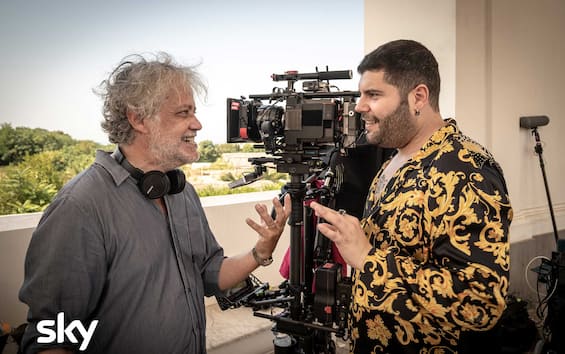 A boss and a little girl enter each other’s body. The consequences? They make you laugh but also reflect. This is the heart of Rosanero: fairy tale, with some dark brushstrokes, which already promised well from the screenplay, written by the director Andrea Porporati himself, and based on the novel by the Palermo-born Maria Tronca.

But the step from the script to the film is not a short one, because the set is involved. A difficult set that of Rosanero? Apparently certainly yes, as Andrea Porporati says amused, citing an unsuspected golden rule of cinema: “There is an unwritten rule, which is that of the 3 B’s, which says that those films in which there are Beasts, Children and Boats become very difficult to turn. Beasts and children, for obvious reasons, and the boats because they never stand still!“.

No boats in Rosanero, but beasts and children to manage, yes. Starting with the co-star Fabiana Martucci (10 years old from Caserta), who plays the little Rosetta, whose inseparable companion is her dog Stella, to continue with a group of bullies ready to mock her and finish with the big hit: Sheeba , a majestic tiger whose cage dominates the gorgeous and gaudy bedroom of the boss Totò o ‘Nero, alias Salvatore Esposito, and who represents his only true love, the ideal girlfriend with whom to have breakfast every single day.

To interpret Sheeba in reality it is not a she, but a he and to reveal it is a true legend of the world of cinema (a title for all: Sandokan) tiger trainer Daniel Berquiny Leibovici: “Sheeba’s real name is Joni. He is a boy, he is seven years old and he eats 10 kilos of meat a day ”. Joni is a very experienced four-legged actor, a real set animal, and between him and Salvatore Esposito it was immediately love at first sight, which is not at all obvious, as eyewitness number one tells us, the omnipresent, inevitably. , Andrea Porporati: “while with me she was very bad and also with all the others, with him instead she crouched down, lay down to hear him better, and for example in the scene in which Totò in the Rosetta version dances in front of her, she instead of ignoring him, or peeing or doing something tiger-like, she started looking at him. All things of course that we did not expect but that we immediately exploited and put into the film ”.

Salvatore Esposito, who confessed to us being a great animal lover, was also surprised by the reaction of his four-legged colleague: “The tiger was very good. My character, Totò in more than one scene has a dialogue with the tiger and at times it happened that luckily she would respond to my jokes, she lowered herself, did incredible things “. But if the spark immediately struck the first meeting between Salvatore and the tiger Joni, the same cannot be said of the one between Fabiana and Salvatore, because for the little girl it was a real shock more than a meeting. The reason? She didn’t expect it. In fact, after having beaten the competition audition after audition, that is to say a hundred aspiring Rosette girls, and having won the part, no one had told her that her partner on the set would be the actor of Gomorrah, a true icon for her, and so when Salvatore showed up in flesh and blood in the production office where the film was being prepared “she remained silent for half an hour, it was a shock, first of all because she didn’t expect it”, says Porporati, and adds giggling “but then in a certain sense he also realized that it was a real film!”.