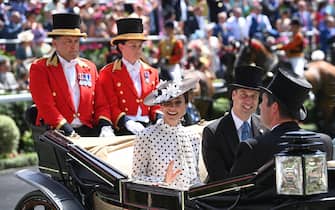 WATCH THE VIDEO: William and Kate contested in Jamaica

Usually the Royals participate in one of the first 3 days, in this edition they waited until the fourth day for a series of other public commitments already made

London, William and Kate do the honors at the Buckingham Palace Garden Party. PHOTO

United Kingdom, all members of the Royal Family from the 1930s to today. PHOTO

Famously Kate, unlike the other members of the royal family, does not have a good relationship with horses. She has said in the past that she is allergic

The Crown, the casting for the character of Kate is underway. Here are the requirements to apply

The couple arrived in one carriage together with Arthur and Martha Vestey: it is the son of the former Master of the Queen’s Horse, who died together with his wife during the pandemic

According to British media, Kate wore an Alessandra Rich brown and white polka dot dress paired with a hat with floral details on the top by Sally-Ann Provan

The royal couple upon arrival at the event