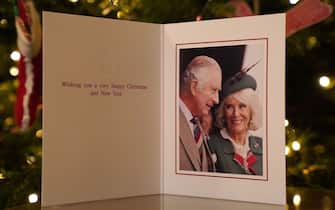 The week of the royals of Europe has been punctuated by the publication of the images of the Christmas cards which, from the palaces, are already reaching special destinations inside and outside the kingdom. First postcard as a sovereign for King Charles III and his queen consort Camilla who, for this occasion, chose a photo of Sam Hussein from last September, not at all Christmassy. Behind the choice of the portrait (already much criticized), perhaps the position of the new king in terms of religion. Elizabeth II’s heir has declared himself a defender of all faiths

In Spain, instead, it is Leonor and Sofia, respectively the Princess of Asturias and the Infanta, who wish a Merry Christmas and a Happy New Year. The daughters of King Felipe VI and Queen Letizia Ortiz were portrayed embracing in the gardens of the Zarzuela, a pose that demonstrates the very strong bond that unites them despite now living apart since Leonor began her studies in the United Kingdom

All together passionately: this is the theme of the greetings from William and Kate, princes of Wales from this year. They too, with the portrait taken during the summer where they are all dressed very casually, have chosen to highlight the family through a photo that has nothing to do with the holidays. The location is Norfolk, where the British royal family will meet on December 25th. The goal is that of Matt Porteous

William and Kate with their children, the photo in jeans for Christmas greetings

A complete family for the Belgian royals who, in the group portrait of their Christmas card, also wanted their quadrupeds, Jeep and Simba. In the photo, together with King Philip and Queen Matilda, the four children: Crown Princess Elizabeth, Prince Emmanuel, Prince Gabriel and Princess Eleonora. The photographer is Bas Bogaerts

In Monaco, however, Princess Charlène was the guest of honor at the Bal de Noël, a gala evening organized at the Hotel Hermitage in Montecarlo for charity by the foundation that she herself created. Without her husband Prince Albert, the 44-year-old flaunted her elegance and a sequin-embroidered midnight blue evening gown by Carolina Herrera

Albert of Monaco was, however, alongside the princess for a new visit to the Monegasque Red Cross. The couple, who had visited the headquarters less than a month ago on the occasion of the National Day, this time brought packages with gifts related to the holidays. Recipients, the needy locals and Ukrainian refugees in the Principality

The couple then appeared in public for another traditional Christmas ceremony: the delivery of gifts and sweets to the children in the courtyard of Palazzo Grimaldi. Also present at the appointment were the twins Jacques and Gabriella who have just turned eight

The festive atmosphere does not distract King Charles from his agenda. The sovereign, together with his wife Camilla, went to Wrexham where they met the actors Ryan Reynolds and Roc McElhenney, owners since last year of Wrexham AFC, a football club with over one hundred and fifty years of history. The two Hollywood stars have vowed to do their utmost to give prominence to the team

King Charles resumes Camilla in front of everyone: the video of the curtain

Official banquet for King Carl XVI Gustaf of Sweden, Queen Silvia and Princess Victoria who honored the Nobel Prize winners in Stockholm. At the event there was no shortage of ball gowns and dream jewels. The queen wore a tiara and set with amethysts of the color of her dress; the heir to the throne has focused on soft colors with jewels and tiara with blue and pink stones, in agreement with the loose and draped dress made for her by Camilla Thulin

On the other hand, overseas commitments for Letizia Ortiz who in Los Angeles undertook to promote the Spanish language by wearing one of the most representative colors of her country. With the red outfit, Carolina Herrera coat and Roberto Torretta suit, the Queen is perfect for a first look at the future Californian headquarters of the Cervantes Institute

The Queen of Spain Letizia: who is King Felipe’s wife. PHOTOSTORY

Maxima of the Netherlands also shines in red, who took part in the Christmas musical Gala in Amsterdam. The 51-year-old sovereign joined the young performers on stage who performed with more famous adult artists demonstrating great involvement

Although both she and her husband are Muslims, as are almost the entire population of her country, Rania of Jordan attended the Christmas rituals of the Catholic minority of her subjects. The Queen went to Fuheis to meet the children and turn on the lights in yet another gesture of closeness to those who profess a faith other than Islam. This is the snapshot of the day

Photos with festive outfit and green Christmas firs also for Princess Victoria of Sweden and her husband Daniel Westling. Here they are in their palace in Stockholm

Princess of Wales Kate Middleton’s week was full of social and media appearances in view of the appointment with the awaited Christmas concert in Westminster. And if the forty-year-old arranges the last decorations with a Christmas sweater on Twitter, for the concert TV spot she brings out the sequins: her dress by the London brand Needle & Thread, all embroidery and transparencies, immediately became the most desired party dress of the moment

In the same hours in which the images of the British royals at the Westminster concert spread, on TV, in streaming, the story of Harry of England and Meghan Markle of their last, tormented years in the palace continues. The release of the second and last part of the docuseries Harry & Meghan was scheduled for December 15th and this time the second son of King Charles has something more to say about the way he was treated by the British institution and his relatives in the United Kingdom

“Harry & Meghan”, from William’s screams at the farewell to the Palazzo: the latest episodes

Strengthened by the appreciation for the 2021 edition, in which she also demonstrated her talent at the piano, Kate Middleton takes her place as protagonist at the Royal Carols: Together at Christmas. All her goals at Westminster Abbey are for her who for the occasion chose one of her adored hers her burgundy dress coat, this one made by the English Eponine London, with pumps in the same shade by the Italian brand Gianvito Reds

Together at Christmas, the Christmas concert conducted (and created) by Kate Middleton

At the evening event in Westminster next to the Princess of Wales, her husband William and the couple’s first two children, Princes George and Charlotte, the latter dressed in the same colors as their mother

In addition to them, also present were the Middletons, King Charles and the queen consort, Beatrice and Eugenia of York with their respective husbands and Zara Phillips with her husband Mike Tindall. Together the British royals have given proof of family unity in the face of accusations launched by Harry and Meghan from the States

Royal families, the news: from greeting cards to Kate Middleton star of the Royal Carol. PHOTO