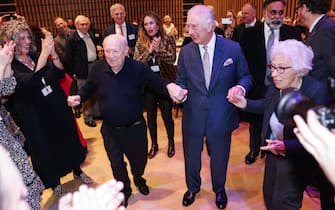 With his visit to the Jewish community of Finchley Road, north London, where he danced joyfully together with the elders of JW3, King Charles III won many hearts by demonstrating how important the religious integration of his country is to him. During the visit organized close to the Hanukkah holiday, the sovereign spoke with Eva Schloss, the ninety-three-year-old sister-in-law of Anne Frank, born from the second marriage of the father of the child symbol of the Holocaust

The Swedish royal family attended the closing ceremony of the Swedish Academy year in Stockholm, which is responsible for, among other tasks, nominating the winners of the Nobel Prize for literature. The event was attended (from left): Queen Silvia, King Carl XVI Gustaf (who has the High Patronage of the Academy), Crown Princess Victoria and her husband, Prince Daniel

Prince Albert II of Monaco took part, in Monte Carlo, in the award ceremony of the twentieth Golden Foot Award, won this year by Robert Lewandowski. The Pole, like all the other winners, will have the honor of leaving his footprints on the Champions Promenade in Montecarlo

Great enthusiasm in Kortrijk for the visit of King Philip and Queen Mathilde to the Heilig Hart elderly care center. The sovereign, much loved by her subjects, received a floral tribute from the guests of the structure

Queen Letizia Ortiz also visited her country at the University Pediatric Hospital of Madrid. The sovereign was updated on the developments of the “Yo Cuento” project which helps patients with neurological pathologies to improve their conditions through activities carried out with actors and theater directors. As always, King Felipe’s wife was greatly appreciated, who chose a look with a cheerful color to visit the young patients

Just days away from a family Christmas at Sandringham, the first without Queen Elizabeth, senior members of the British crown have gathered in Windsor for lunch. Here are the photos of the arrival at the Castle of Camilla, the Queen consort, of Edward, Earl of Wessex and of the royal princess Anne

UK, Princess Anne is the Royal who worked the most in 2022. The ranking

Christmas concert in presence, and many guests, as had never happened in the seasons characterized by the pandemic, at the Royal Palace of Brussels where the Belgian royals gathered for the traditional family shot. With King Philip and Queen Mathilde, Princes Gabriel, Elizabeth and Eleanor

Gorgeous Queen Mathilde and her daughter, 21-year-old Elisabeth, who stole the show among those present with her elegance and party outfit, a blue dress by Diane von Furstenberg complemented by floral design earrings enameled with repertoire gems of her mother’s jewels. The Sovereign, on the other hand, chose a dress with a red full skirt for Christmas by the Belgian Maison Natan

At the Christmas concert in Stockholm, however, it is Prince Carl Philip and Princess Sofia who capture everyone’s attention. The couple, married since 2015, sported a coordinated midnight blue outfit to attend the “Christmas in Vasastan” event. The look of the thirty-eight-year-old is inspired by an embroidered organza dress by the Swedish designer Lars Wallin. For the occasion, the couple has collected donations in favor of the charity founded by the princess, the Project Playground

The British media have made much of Prince William’s presence at the wedding of Rose Farquhar, with whom the Prince of Wales had an affair over twenty years ago. King Charles’s son attended the wedding in Gloucestershire in the name of the friendship that has always linked him to Farquhar that he has known since he was a child. At the ceremony, which was attended by many of William’s former school friends, Kate Middleton was missing, who remained in London. The absence of the princess has been material for the British tabloids

Prince William, from shots with Lady D to photos with Kate and children

New honorary title for Kate Middleton invested by King Charles with the role of colonel of the Irish Guards. The position had until recently been held by Prince William who has instead assumed the title of Colonel of the Welsh Guards, more appropriate now that he is Prince of Wales. Middleton has always honored the Irish Guards by wearing a green dress on St. Patrick’s Day. In this 2019 photo, the princess celebrates with a pint of Guinness

In the commercial that introduces the “Royal Carols: Together at Christmas”, the concert recorded at Westminster Abbey which is broadcast in the United Kingdom on the evening of December 24, Kate Middleton underlined how the event she curated for the second consecutive year is this time dedicated to the late Queen Elizabeth II whose absence, especially during the holidays, a time she loved, is deeply felt. At the same time, the princess thanked the guests who had attended and those who had spent their time on behalf of the Royal Foundation

Together at Christmas, the Christmas concert conducted (and created) by Kate Middleton

The Bank of England banknote project with the portrait of King Charles III appeared on the official Instagram page of the British royal house. The new banknotes, which will coexist with the old ones depicting Queen Elizabeth, will enter circulation from mid-2024

Charles III, the first banknotes with his face in the UK. PHOTO

Not all the crowned heads will spend Christmas in the warmth of their palaces, as these photos of Princess Marie of Denmark on holiday in Sydney prove. The Danish royal, who is of Australian descent, returned to her country for the holidays where she was photographed in a relaxed attitude: without makeup and in shorts and a straw hat

Royal families, the news: from Charles III to the Jewish community at Kate’s Royal Carols. PHOTO