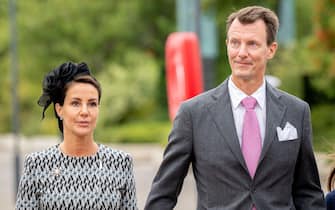 While Christmas trees are springing up in the palaces of European royalty and family celebrations are being planned, according to the Dane BT, Joachim of Denmark and his wife Marie Cavallier are about to leave Europe for the new position of the prince who, starting next summer, will work at the Danish embassy in the United States. The new job would confirm Joachim’s desire to distance himself from the family, especially after the decision of his mother, Queen Margrethe, to deprive Joachim and Marie’s four children of royal titles

Not even the upcoming holidays will be able to reconcile the Danish royal family. Confirmation has arrived from the palace that Queen Margrethe will spend Christmas without her children. The eighty-two-year-old sovereign will be joined at Marselisborg Castle by her sister, Princess Benedetta

Margaret II of Denmark celebrates her jubilee: she is now the only queen regnant

Christmas with relatives, as hasn’t happened for thirty years now, however, for Sarah Ferguson who, according to the Sun, would be one of Sandringham’s guests for the upcoming parties. Banned from the Norfolk residence due to Prince Philip’s open antipathy towards her, the Duchess of York would now be closer to King Charles and both she and her two daughters, Beatrice and Eugenia with their respective husbands, could spend a few days together at the rest of the family

Who is Sarah Ferguson, from the story with Andrea at the funeral of the queen

Always the English press, the Daily Mailrevealed new details on the state of health of the late Elizabeth II which, according to what was reported in the biographical book Elizabeth: An Intimate Portrait, in her final months, she reportedly suffered from myeloma, a form of bone cancer. According to Gyles Brandreth, author of the volume which will be released on December 18, the sovereign stoically faced her latest commitments aware of the seriousness of her illness

Elizabeth II, according to the tabloids would have suffered from bone marrow cancer

The Queen consort Camilla hosted a reception at Buckingham Palace organized as part of the “16 days of activism”, a United Nations campaign to focus attention on the fight against violence against girls and women in the world. The theme of violence against women is dear to King Charles’s wife who has publicly spent herself several times in favor of victims of abuse in the United Kingdom and beyond

In the photo, Queen Camilla shakes hands with Fatima Maada Bio, the First Lady of Sierra Leone. Behind the two women, other illustrious guests of the conference can be seen: Sophie, Countess of Wessex, Queen Matilda of Belgium, Queen Rania of Jordan and Princess Maria of Denmark

The final photo of the meeting portrays together some of the most prominent women on the planet. From left: Sophie Countess of Wessex, Queen Matilda of Belgium, Queen Consort Camilla, Rania, Queen of Jordan, Maria Princess of Denmark, First Lady of Sierra Leone Fatima Maada Bio and First Lady of Ukraine Olena Zelenska

Who is Olena Zelenska, wife of the Ukrainian president

The discussed divorce between the princes Caroline of Monaco and Ernst of Hanover, in fact separated for many years, could materialize now that the sixty-eight year old shows himself openly in public with Claudia Stilianopoulos with whom he has been in a couple for at least a year. The two had themselves photographed together in Madrid for the evening celebrating the sixtieth anniversary of a well-known Italian restaurant. As for divorce, it seems that the greatest resistance comes from Princess Carolina who, by making her break official, would lose the title of Royal Highness

The Welsh princes William and Kate landed in Boston on November 30 for a planned visit to the States, which they had been missing for eight years. The British couple are guests of honor at theEarthshot Prize whose official ceremony is set for December 2nd. Kate Middleton captured the attention of those present with her impeccable dark Alexander McQueen suit and a jewel dear to her subjects: the sapphire earrings that belonged to Lady Diana

Usa, Kate and William are in Boston for a 3 day visit. PHOTO

On their first evening in Boston, after greeting the city’s mayor, the princes appeared in the bleachers of the TD Garden in the front row at the match between the Boston Celtics and the Miami Heat. Impossible not to dwell on their harmony and their looks: the heir to the throne, under his jacket, showed off a denim shirt. Kate Middleton showed off a vintage Chanel blazer, one of her best known and most appreciated in her wardrobe

Kate and William in the USA, the program of the trip to Boston

Before the match, the pair attended the official opening of the second edition of theEarthshot Prize, symbolically turning on sixteen green lights throughout the city in honor of the event dedicated to environmental protection. For her appearance at City Hall, Kate Middleton also wore green choosing a Burberry dress with an ultra-recognizable tartan design. It is clear from her first outfits that the princess in America wants to be the spokesperson for the most important British designers

It goes without saying that every move of the princes was followed by the media who devoted all their attention to the Princess of Wales, always chic, refined and prodigal in stopping with the children. During their stop at Greentown Labs in Somerville, the royal couple were paid their respects by a child dressed as a British guard

Kate and Prince William in Boston, photos from the second day

In Monaco, Prince Albert met the President of the Republic of Liberia George Weah who was a guest in the Principality these days for the thirteenth International Peace & Sport Forum where he received an award. Weah, former footballer and Ballon d’Or winner, played professionally for AS Monaco in the late 1980s and early 1990s

Coinciding with the Welsh princes’ visit to America, their stateside relatives Prince Harry and Meghan Markle Duchess of Sussex have hogged the news with the release of the first trailer for Harry and Meghan, the documentary series to be distributed soon by Netflix (it will also be visible on Sky Q and via the app on the Now Smart Stick). In the teaser, the first words of the two protagonists and many unpublished images of the couple

While Harry of England continues his adventure with the world of streaming, Prince William makes his debut on TikTok. The forty-year-old demonstrated his skills as a digital creator in a video posted on the profile of theEarthshot Prizethe green award of which he is co-creator with Sir David Attenboroug

Royal families, the news: from preparations for Christmas to Kate’s looks in the USA. PHOTO