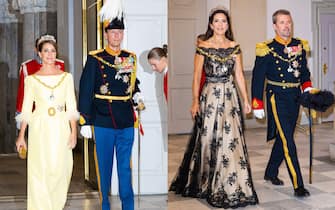 The week of the royal families of Europe began with the storm that hit the Danish royal house, already at the center of the news for the decision of Queen Margarethe to remove the titles of the children of the second son Joachim, however far from the throne. The Spanish Vanitatis El Confidencial reveals that the decision could be Joachim’s alleged interest (pictured with his wife on the left) in his sister-in-law Mary, wife of brother Frederick, heir to the throne (pictured right)

The rulers of Holland, King William-Alexander and Queen Maxima made an official multi-day visit to Sweden. On the first evening they attended a sumptuous state banquet. Here they are posing with and Carl XVI Gustavo and Queen Silvia of Sweden (the last two on the right)

Royal families, the news: from William and Kate in Wales to the looks of Letizia of Spain. PHOTO

Another gala engagement for the second evening of the official visit of the Dutch royal couple, guest of a concert at the Stockholm Concert Hall. Queen Maxima sits between King Carl Gustav (the first on the left) and the princes Carl Philip and Sophia of Sweden (the last two on the right)

On the occasion of World Mental Health Day, William and Kate, princes of Wales took part in a radio show aimed at a young audience in BBC 1’s studios. Here is their souvenir photo

Charlotte Casiraghi and her mother Princess Caroline of Monaco appeared together at the Monte Carlo Opera where they awarded the annual Prince Pierre Awards on behalf of the Foundation that deals with the protection of arts and culture desired by Prince Rainier. Charlotte wore, as always, a Chanel creation

Royal families, the news: from the funeral of Elizabeth II to the commitments of William and Kate PHOTO

With an official statement, Buckingham Palace announced the date of the coronation of King Charles III. The new ruler will be solemnly crowned at Westminster Abbey by the Archbishop of Canterbury on Saturday 6 May 2023 – not June as his mother, as the British press speculated

Royal families, the news: say hello to Elizabeth II to William and Harry together. PHOTO

The Spanish royals were the protagonists of the Columbus Day celebrations that are held in the country on 12 October. The royal couple was joined by the second daughter Sofia (Leonor is absent because she is busy with her studies)

For this important national holiday, the Queen wore a dress from a Spanish brand. The dress with cape shoulders is from the Made in Spain Vogana brand

On October 12, on the occasion of her fourth wedding anniversary, Eugenie of York posted a stunning photo of her wedding day to publicly wish her husband, Jack Brooksbank. The couple welcomed their first child in 2021 – August Philiph Hawke

European royal families, not just the United Kingdom: the other nations where there is the monarchy. PHOTO

Queen consort Camilla visited Chelsea and Westminter Hospital to visit the wards that house victims of domestic abuse and stopped to speak at length with patients and staff of the facility.

For the 10th anniversary of the Coach Core charity program in support of sport for people living in difficult conditions, Welsh princes William and Kate visited the Copperbox Arena in Stratford, London, home of the 2012 Olympic Games . Sports lovers at all levels, the couple tested themselves with boxing, bowls and more

Observers of the looks of the Princess of Wales were particularly impressed with the choice of a cobalt blue blazer that fashion aficionados have recognized as a vintage piece of some value. The long tweed jacket with a screwed cut, with front pockets, double buttoning and black edges, is part of a Chanel collection from 1995. The garment, presented in the runway by Claudia Shiffer, is an iconic piece of the Maison. The release sparked the hunt for the blazer on second-hand clothing retail platforms

Beatrice of York appeared in public with her husband Edoardo Mapelli Mozzi. The couple were photographed at the Frieze Art Fair held every October in Regent’s Park

King Charles III met with British Prime Minister Liz Truss with whom he is now required to meet every week. In welcoming it, the new ruler let slip the expression “Here again? Good heavens ”, for some, a symptom of obvious concern for the country’s economic conditions; for others, a simple gaffe

With a video message on Instagram, Sarah Ferguson announced the release of her new book A Most Intriguing Lady, a historical novel, available to the public from next March. The Duchess of York has had a solid career as a writer for years now

Who is Sarah Ferguson, from the story with Andrea to the queen’s funeral