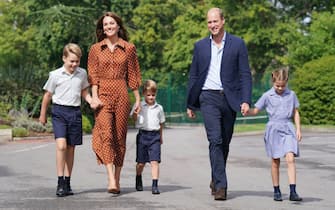 The week opens with George, Charlotte and Louis returning to school. Accompanying them to Lambrook School, William and Kate (the latter with a slightly shorter haircut than the usual look)

On 6 September, Queen Elizabeth II appoints Liz Truss as the new British Prime Minister. Smiling but emaciated, with her livid hands, she takes her part in what will be her last official engagement

King Charles III, the first speech: “My mother an example. I will serve you forever.” VIDEO

On Friday 8 September, the first worrying news arrives, which speak of rapidly deteriorating health conditions. BBC hosts dress in black, broadcasts are cut off, and William is spotted as he takes Andrea and Sophie to Balmoral.

On a British Airways flight, Harry arrives in Scotland. Carlo’s second son, in a dark suit, didn’t have time to give his beloved grandmother his last farewell

Queen Elizabeth, the most bizarre gadgets: from Swatch to Barbie. PHOTO

The British citizens immediately gathered around the Royal Family, to celebrate the memory of the Queen. Hundreds gather in front of Buckingham Palace, depositing flowers, letters and tickets

The Company of Honor of the Artillery performs the salute with cannons at the Tower of London, on the occasion of the death of the Queen

Queen Elizabeth, all the colors of her outfits. PHOTO

The image of the Queen fills the streets and squares around the world. Starting with London, of course, with its Piccadilly Circus

Farewell to Elizabeth II, the queen’s last hours in Balmoral with her children Charles and Anna

Farewell to the Queen, Truss: Elizabeth II among the greatest leaders ever

Princess Charlene of Monaco extends her condolences to the British Royal Family. “I am deeply saddened by the news of the death of her Majesty Queen Elizabeth II, whose dedication and service have been recognized throughout the world during the 70 years of her reign. Today my thoughts are with her family, her children, her grandchildren, her great-grandchildren and the British people “she wrote

Farewell to Elizabeth II, the queen’s last hours in Balmoral with her children Charles and Anna

Death of Queen Elizabeth II, what happens now: all the stages up to the funeral

With Charles III officially becoming King, Camilla becomes Queen Consort: she will therefore have greater powers than those she had up to now, and will have to support the sovereign (the decision was made by the Queen already last February)

William and Kate also change their titles: William, as the King’s eldest son, inherits the title of Duke of Cornwall (same goes for his wife Kate)

The first speech of King Charles III, which lasted 9 minutes, is a heartfelt tribute to his mother. “To my dear mum, as the last great journey begins to reach my dear deceased dad, I simply want to say this: thank you. I will serve the Crown in the same way for as long as God will grant me. “Carlo also speaks of Camilla, now queen consort (” I know she will live up to the role “), and of William (” she will take the Scottish title and it will be mine successor as Duke of Cornwall. ”) Finally, he explains that he has affection for Harry and Meghan

William and Kate, Harry and Meghan: the brothers and their wives together again. The images show them as they walk towards the area dedicated to the tributes to the Sovereign, at Windsor Castle. According to the gossip, William would have decided to invite his brother and sister-in-law (a bit surprising)