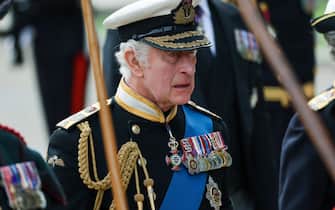 On 19 September the world stopped to accompany Elizabeth II on her last journey. The state funeral, austere and imposing, brought the new Sovereign, Charles III, under the eyes of all, who after intense days around the kingdom let out moments of emotion

WATCH THE LATEST VIDEOS about the Royal Family

Among the most observed, Catherine Middleton, the new Princess of Wales who, during the funeral ceremony, was vigilant, alongside her two eldest children, George and Charlotte, who with their composure softened the world

Queen Elizabeth, princes George and Charlotte at their great-grandmother’s funeral

The presence of the most prominent women on the planet was also the subject of debate by fashion commentators who evaluated the looks of the funeral participants, judging it more or less adequate to the formality of the event. Not a few notes for Meghan Markle who, with her Stella McCartney dress with hooded sleeves, left a portion of her arms uncovered, visible despite the long gloves, an option strongly discouraged on these occasions

Harry and Meghan at Elizabeth II’s funeral: from gestures to looks. PHOTO

Shortly after the funeral, news of Meghan Markle’s request for a private interview with the new King, in written form, was held in the media, which Charles III would not have followed up on. Hello! confirmed the disputed couple’s departure for Montecito on 20 September

United Kingdom, Meghan Markle would have asked for a meeting with King Charles

On the official profiles of the royal family, which have provided many period testimonies in recent weeks, a photo has appeared that portrays the deceased Sovereign together with her closest loved ones: her father George VI, the Queen mother, her sister Margareth, Philip Duke of Edinburgh. The photo celebrates the burial of Elizabeth II next to them

Elizabeth funeral, from Westminster Abbey to the burial in Windsor. PHOTO

The possible dates of the coronation of King Charles III continue to follow one another. The new ruler, according to the The Suncould take part in the ceremony on June 2, 2023, the same day Elizabeth II was crowned in 1953

King Charles III, the first commitments of the sovereign after the week of mourning in Balmoral

With a note disseminated through the official profiles, Margaret II of Denmark announced that she had tested positive at Covid. The eighty-two-year-old Sovereign, who took part in the funeral of Elizabeth II, took the test on the evening of Tuesday 20 September: at the moment, her state of health does not appear to be worrying. In the absence of the Queen, who already contracted the disease last February, her son, Prince Frederick and his wife will take her place.

After the funeral of the Queen of England, Letizia of Spain flew to New York to fulfill a series of commitments including a meeting with UNICEF on the subject of mental health and another with the director general of the World Health Organization. Notable and very studied, as always, her looks that this time favor American designers: from Carolina Herrera to Narciso Rodriguez who created a capsule for Zara, a brand worn very often by the Sovereign, from which the red look comes

With a video message, Prince William confirmed that on December 2nd he will travel to Boston with his wife Catherine, the Princess of Wales, to take part in The Earthshot Prize, the environmental award he set up together with David Attenborough. The prince in the message stressed the urgency of the climate emergency and praised the effort of scientists and brilliant minds at work for a sustainable revolution

With a trip to Estonia and Germany, already planned, Prince Edward, Earl of Wessex, has returned to his duties. Her Royal Highness, Princess Anne, dedicated herself instead to the official visit of the Royal Navy personnel who attended the Queen’s funeral providing logistical support essential for the success of the exceptional event

Carlo, Anna, Andrea, Edoardo: who are the 4 children of Queen Elizabeth. PHOTO

On the occasion of the Prinsjesdag, which is celebrated every year on the third Tuesday of September, Princess Amalia of Holland (the first on the left, in a green dress) attended the King’s speech in front of Parliament with her family. The eighteen-year-old who recently started university is the heir to the throne of the country

The Crown Prince of Denmark was photographed running in Central Park in one of the few free moments of the official sight in New York at the 77th UN General Assembly. He and his wife, Mary Donaldson, launched Denmark’s bid for a seat on the UN Security Council in 2026

William and Kate made a surprise visit to Windsor to meet the staff who showed their commitment at the Queen’s funeral. Both dressed in black, they showed great cordiality by giving broad smiles to those present. For the couple this is the first public engagement after the burial of Elizabeth II

As often happens, the attention of the photographers went to the Princess of Wales who wore a Dolce and Gabbana coat dress for the occasion. Catherine Middleton appeared smiling and radiant

Kate Middleton and the others in black for the farewell to Queen Elizabeth. PHOTO

During her visit to New York, Letizia of Spain met First Lady Jill Biden at Columbia University’s Irving Medical Center. Both blank, they discussed with students and researchers

Royal families, the news: from the funeral of Elizabeth II to William and Kate. PHOTO