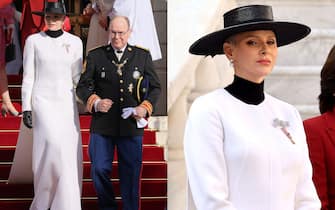 The week of the royal families opened with La Fête du Prince, the National Day of the Principality of Monaco, which is celebrated on 19 November. For the occasion, the entire Grimaldis presented themselves in public. In sight, Prince Albert and Princess Charlene, impeccable with a very long coat on which he has pinned a diamond brooch by Van Cleef & Arpels. The princess had missed the celebrations last year for serious health reasons

As always, Princess Carolina was also very much observed, in a pink suit and wide-brimmed hat, on the balcony waiting for the parade, together with her daughter Charlotte Casiraghi and Alexandra of Hanover, praised for their appropriate and classy looks. With them are little Francesco and Stefano Casiraghi, sons of Pierre

Charlotte Casiraghi: her most iconic looks

Beatrice Borromeo, in a burgundy hat and red Dior suit, a shade chosen in honor of the Principality, stole the show with her beauty, her smile and caring attitude towards her two children. The 37-year-old has been married to Pierre Casiraghi since 2015 and the latter is eighth in line to the throne

The Queen consort Camilla stood out at the horse races in November Ascot, in Berkshire, for some details of her outfit that prove once again the change of pace of the new King’s wife. Camilla sported a showy fur hat , a Fendi bag, an iconic leather Peekaboo, and a multicolored horseshoe-shaped brooch whose gems spell out the word “Minoru”, the name of one of King Edward VII’s Derby-winning horses

King Felipe of Spain visited King Charles III at his private residence, Clarence House, on 21 November. The photos of the meeting, although not included in the official engagement programs of the Spanish sovereign, have nevertheless been made public

Princess Victoria of Sweden and Prince Haakon of Norway met in Kenya for a visit aimed at monitoring the progress of projects for the UNPD, the United Nation Development Programme, which deals with sustainable development

King Charles, Queen Camilla and Princess Kate Middleton of Wales drove across the Mall in a carriage to welcome South African President Cyril Ramaphosa, the first head of state to pay an official visit to the United Kingdom since the death of Elizabeth II. Although Charles III explicitly forbade pomp, Buckingham Palace offered guests a spectacle worthy of state visits of bygone eras

Senior members of the British royal family await the arrival of President Ramaphosa. Kate Middleton pinned on her one of her famous dress coats – a plum-colored model by Emilia Wickstead – her brooch with three diamond feathers and a teardrop emerald that belongs to the princes of Wales. The jewel, whose name is Prince of Wales Feathers Pendant Brooch, belonged to Lady Diana (who used it as a pendant) and was also worn by Camilla when she was Duchess of Cornwall

Windsor dressed up for the first official banquet hosted in honor of South African President Cyril Ramaphosa and his wife Tshepo Motsepe. King Charles gave a speech to the 163 guests at the dinner in which he referred to some moments of his country’s colonial past for which he still feels sad. His attitude on the subject is very different from that of his predecessors and he demonstrated it on this occasion as well

As was the case with Lady Diana in the past, the current Princess of Wales delighted those present with her kindness and her beauty. In a white crystal-embellished gown, a custom-made Jenny Packham design with cape sleeves, Middleton paid tribute to Diana by wearing some of her famous jewelry, including the Cambridge’s Lovers Knot tiara. She also sported an Elizabeth II bracelet of pearls and, in addition to the blue representative sash, the Royal Family Order brooch on a yellow ribbon

Kate Middleton, the look for the state dinner: the Jenny Packham dress and Lady D’s tiara

At the banquet at which the Earls of Wessex, Edward and Sophie did not miss, Queen Camilla received a lot of attention, of course. King Charles’s wife opted for dresses and jewels in two shades of the same colour, and the most attentive ones recognized the diamond and sapphire tiara that belonged to Elizabeth II. The prestigious jewel was the same color as the electric blue couture dress by Bruce Oldfield

Queen Elizabeth, the most beautiful Crown Jewels, from tiaras to necklaces. PHOTO

As promised a few weeks ago, Queen Camilla brought the Paddington Bears left by her subjects to Buckingham Palace to commemorate Elizabeth II at the Barnardo’s London nursery. The puppets had been collected and sterilized with the idea of ​​giving them to children’s charities

Red is definitely the favorite color of the queens this season, as Letizia of Spain, Maxima of Holland and Mathilde of Belgium prove, intent on their public engagements in their respective countries. Among the three looks, the one that caused the most discussion is, of course, that of the Spanish sovereign who showed off Boss leather trousers, a brand she often wears

Queen Mathilde of Belgium and King Philip hosted the President of the Swiss Confederation Ignazio Cassis and his wife Paola on an official visit to Brussels. The Queen, gorgeous as always, wore an Armani Privé cape dress

At Windsor Castle, in St. George’s Hall, the Christmas tree has arrived, a six-metre fir tree, completed a month before the holiday. The tree is located in the path reserved for visitors which until 2 January is enriched with many other Christmas decorations that will make the atmosphere in the sumptuous home even more magical

Royal families, the news: from the Principality Day to the Christmas tree in Windsor. PHOTO