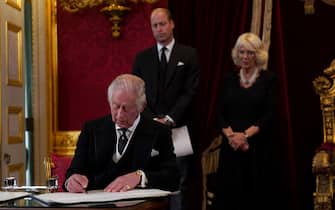 WATCH THE LATEST VIDEOS about the Royal Family

As per protocol, the coffin of Queen Elizabeth III is exhibited at St Giles’ Cathedral in Edinburgh

The coffin of Queen Elizabeth II is moved to London, where it is greeted by thousands of people in obsequious silence as it passes

Royal families, the news: from the death of Elizabeth II to the first speech of King Charles

Over 36 hours in a row: this is the waiting time of the subjects for the last farewell to Elizabeth II at the Palace of Westminster in London. No mess in the approximately 7 km long queue

Queen Elizabeth’s death, kilometric queues for the homage of the subjects

Princes William and Harry, along with their spouses Kate Middleton and Meghan Markle, first showed up together in public to review the flowers left for Queen Elizabeth II.

Funeral of Queen Elizabeth, Meghan and Kate in separate cars in Westminster

Charles III, gets dirty with ink during the signing: outburst of irritation

Despite having renounced military ranks, Prince Harry was allowed to wear the royal uniform like the other members of the family, and Andrea, on the occasion of the wake

Elizabeth funeral, Prince Harry will be able to wear the royal uniform

David Beckham joined the hundreds of thousands of subjects who went to pay their respects to Queen Elizabeth II’s coffin in Westminster. Also for him 12 hours of queue

Round figure for the queen of Spain Letizia Ortiz. King Philip’s wife turned 50

Royal wedding for Maria Laura of Belgium, granddaughter of King Albert II and daughter of Princess Astrid. Her husband is William Isvy

European royal families, not just the United Kingdom: where there is the monarchy. PHOTO