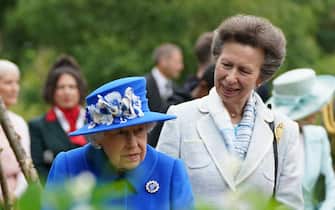 There Princess Anna of the United Kingdom is the daughter second child of Queen Elizabeth and Prince Philip. She is the only daughter of the sovereign and sister of Carlo, Andrea and Edoardo, she was born in London on 15 August 1950. she In the line of succession to the throne she is currently sixteenth. She was very attached to her mother and was the only one present (along with the new king) at the time of her death. She also had the privilege of being the only one of the Royal family on the plane that brought the Queen’s coffin back from Scotland to London.

WATCH THE VIDEO: Elizabeth II, Scotland’s homage to the queen

Legend has it that Anna (Anne Elizabeth Alice Louise Mountbatten-Windsor married Laurence) was Philip’s favorite daughter. At the coronation of her mother in 1953, she acquired the full height title (in the photo Elisabetta with little Carlo and Anna)

Carlo, Anna, Andrea, Edoardo: who are the 4 children of Queen Elizabeth. PHOTO

Great lover of horse ridinghe practiced competitive activity in this sport, winning gold at the European Eventing Championship in 1971 and two silvers in 1975. In 1976 he also took part in the Montreal Olympics, becoming the first member of the British Royal family to participate in an Olympics. In the 1980s she was president of the international riding federation and a member of the IOC

Sky TG24 special on the death of Queen Elizabeth

In 1973 she married Mark Phillips, lieutenant of the Queen’s Dragons. The couple had two sons: Peter (born in 1977) and Zara (born in 1981). Already in 1989 the spouses announced their intention to separate but the divorce was formally completed only in 1992

In 1974, Princess Anne and Mark Phillips underwent a kidnapping attempt. While they were in the car after a charity event, another car stopped there and the driver started shooting in the air. The man, Ian Ball, said he wanted to kidnap Anna to ask for a ransom of 2 million pounds which he then wanted to donate to the NHS (the National Health Service). The princess managed to escape and Ball was arrested, found guilty of attempted murder and attempted kidnapping and hospitalized in a psychiatric clinic.

Queen Elizabeth, the most difficult moments: from Diana’s death to Philip’s farewell. PHOTO

Princess Anna she got married in second marriage December 12, 1992 at Balmoral, with Royal Navy Commander Timothy Laurence. As happened with her first husband, he too did not receive any securities

Anna has always shown great attention to public life, especially for fundraising and events for charitable organizations. He has carried out about 500 assignments on behalf of the queen, with whom, among other things, he was united by a great passion for horses

For Elizabeth she was the beloved only daughter, and it was to her that he conferred the not obvious or automatic title of Royal Princess. Only one woman in the UK can hold this title which she elevates beyond the “simple” rank of princess, already assumed at birth.

Anna was particularly attached to the mother, she has been its shadow especially in recent years, and spent several days with her in Scotland also during this last summer retreat. The 72-year-old princess was the only one along with Carlo to be present at the bedside of Elizabeth before she died. She accompanied the coffin out of her beloved Balmoral for the last time (in the photo the procession in Edinburgh) and “brought” her queen back to her London