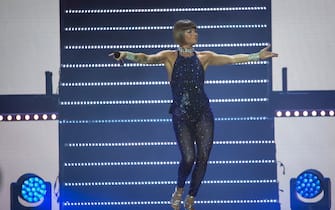 The singer from Salento Alessandro Amoroso it is one of the “certainties” when it comes to attending these events. He will also be there tonight, Wednesday 31 August, at the Verona Arena for the RTL 102.5 Power Hits Estate 2022 concert

Alpha is one of Spotify’s most listened to rappers. His real name is Andrea De Filippi

The singer-songwriter Aries also boasts a participation in X Factor. She is the pseudonym of Arianna Del Giaccio

WATCH THE VIDEO: Who is Aries

There is also Baby Kthe only Italian singer, together with Giusy Ferreri, to have obtained a diamond disc from FIMI

Blanco, who is the winning singer of Sanremo 2022. PHOTO STORY

It is gold record for “Tropicana” by Boomdabash and Annalisa

Noemi and Carl Brave duet again together with Hula-Hoop

Expected Coez for another performance of his, always exciting

WATCH THE VIDEO: Coez, 7 curiosities about the singer

Singer Elodie launched by Friends is ready to perform its greatest hits, including the latest Bath at midnight

Among the many musical genres that we will listen to, there is also rap. Who better than Fabri Fibra & Maurizio Carucci to unleash the Arena?

The trio Fedez, Tananai and Mara Sattei will perform with the hit The sweet life

The Tuscan singer-songwriter Francesco Gabbanitwice winner in Sanremo in two different categories, will be among those present

Also waiting for Fred De Palma and his most famous hits

The participation of Iramayet another artist launched by Friends

The duo The List Representative, which has depopulated on the radio with Bye Byeis called to stir up the crowd

Marco Mengoni will certainly sing his latest song No stress

Myss Ketawhose identity is unknown, will make the Arena dance with Finimondo

Rhove is the singer known for his Shaking

Rkomi he participated in the last edition of the Sanremo Festival and, since that moment, his notoriety has increased