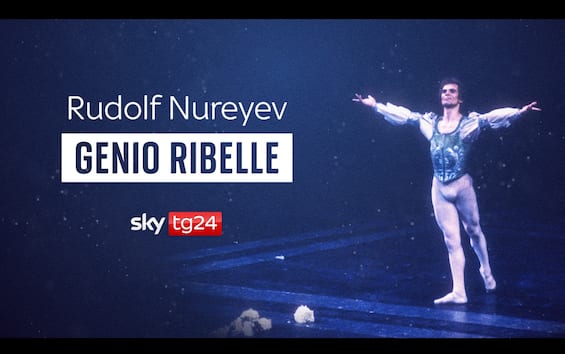 The greatest dancer of all time, absolute star of all the biggest theaters in the world, an international star, a myth capable of bringing classical ballet closer to all spectators, stripping it of its elitism. An unprecedented worldwide success that has gone beyond theatrical boundaries by invading TV, fashion and showbiz

Thirty years after his death, Sky TG24 celebrates the life and career of Rudolf Nuriev with a special titled “Rudolf Nureyev REBEL GENIUS”to tell the story of one of the most fascinating artistic personalities of the twentieth century.

An extraordinary life since his birth, which took place in a carriage of the Trans-Siberian train, “on the way” as he liked to tell, between the poverty and hardships of childhood in the Soviet Union and continued in Europe, where his talent saw the light for be able to shine. Paris the city of turning point, when in 1961 he decided never to return to Russia and to remain in the West. A defection in the midst of the Cold War which is retraced in the special by Pierre Lacotte who personally helped him in those dramatic moments to escape the KGB agents and to ask for political asylum in France. “He wasn’t involved in politics, but he did it anyway with his escape to France” recalls Luigi Pignotti, his historic manager. From there London and then the Teatro Alla Scala in Milan, an incredible career that has seen him dominate the stages of Europe and overseas. Nureyev distinguished himself not only for his incredible skills as a dancer, but also for having revolutionized the world of ballet by giving equal importance to male roles (at the time subordinate to the figure of the dancer) re-reading the choreography of the great classics of the repertoire. A visionary who dedicated his entire life to ballet with obsessive attention to work and unmatched dedication, arriving to do 280 performances a year; an artist who left an indelible mark on the cultural panorama of the last century told through the words of those who had the great fortune and privilege of being next to him.

The special “Rudolf Nureyev GENIO RIBELLE” curated by Chiara Ribichini and broadcast tomorrow at 9 pm on Sky TG24 and at 11.10 pm on Sky Arte and always available On Demand, traces the extraordinary career of an absolute artist, capable of leaving an enormous legacy in the world of dance, reconstructed through historical video and photographic contributions and exclusive interviews directed by Flavio Maspes.

In the special, the testimonies of Sylvie Guillem, absolute star of dance and first ballerina in the world to receive the Golden Lion for Lifetime Achievement who was named étoile by Nureyev when she was only 19 years old, the youngest in the history of the Paris Opera, Manuel Legris, director of the ballet corps of the Teatro alla Scala who Nureyev appointed étoile of the Paris Opéra in 1986, Pierre Lacotte, choreographer and artistic director friend of Nureyev, the étoile Roberto Bolle who was noticed by Nureyev when he was only 15 years old and Luigi Pignotti, Nureyev’s manager and physiotherapist.

The contributions of “Rudolf Nureyev GENIO RIBELLE” will also be available on the skytg24.it website, where it will be possible to follow the special and find lots of extra content.