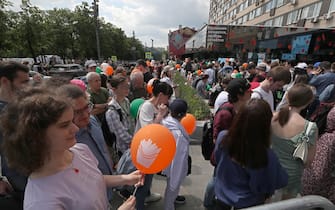 Among the many Western companies that left Russia after the invasion of Ukraine and the sanctions imposed against Moscow, there is also McDonald’s. The restaurants of the fast food chain were acquired by the Sistema Pbo company and renamed “Vkousno i totchka”, that is “Delicious and that’s it”. And today the first of these stores has reopened in Moscow

On the day of the National Federation Day, the new ownership of the fast food chain – whose opening in the 1990s marked the new course of the country that looked to the West – inaugurated the historic restaurant on Pushkin Squarewhere dozens of people gathered

Tomorrowaccording to the general manager of the new group Oleg Paroyev, 50 more restaurants will open and then 50 to 100 every week

Ukrainian war, the hypothesis of Romania emerges for the wheat crisis: what it is

Instead of the two golden arches, the “Russian McDonald’s” has a new logo: two stylized orange chips next to a red circle alluding to a hamburgeron a green background

Zelensky: “Keeping Kiev out of the EU goes against Europe itself”

The menu still has double cheeseburgers, as well as a wide range of ice creams and desserts, but the prefix “Mc” no longer appears. The property has specified that for now between drinks there is no alcohol

Ukrainian war, the weapons supplied so far in Kiev and those required

THE prices have risen “slightly” compared to the previous ones due to theinflation that hit Russia hardbut they remain “reasonable,” Paroyev explained

McDonald’s announced its exit from Russia on May 16, following the invasion of Ukraine and Western sanctions imposed on the country. Subsequently, the chain’s 850 restaurants in the Federation have been sold to the dealer Aleksander Govor (pictured), who already ran 25 of the chain’s restaurants in Siberia

“I am ambitious and I am not only planning to reopen the 850 restaurants, but to develop new ones“Govor announced. The new company has ensured that former McDonald’s employees in Russia will keep their jobs.

The opening of the first McDonald’s store in Russia in 1990which took place in Moscow in Pushkin Square, had been one of the best known symbols of the end of the Cold War and the opening up of the country to the West