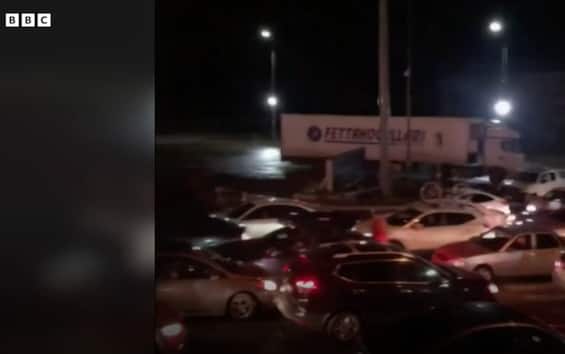 Long queues formed overnight on the border between Russia and Georgia, according to reports Bbc, which publishes some images of endless rows of cars with mostly Russian men on board who are trying to leave the country to avoid forced conscription for the war in Ukraine. An increase in traffic was also recorded overnight at the border with Finland, which shares a 1,300-kilometer border with Russia but requires a visa for entry (RUSSIAN-UKRAINE WAR, REAL-TIME UPDATES).

“I’ll break an arm, a leg, anything to avoid leaving”

The Kremlin called the reports of the escape of men of conscription age exaggerated, but some witnesses estimated that the queue of cars at the Upper Lars checkpoint was about 5 kilometers long, while another group said it took seven hours to cross the border. A man in line of call-to-arms age who refused to remain anonymous, told a reporter from the Bbc of having taken his passport and headed to the border without even packing his bags immediately after President Vladimir Putin’s announcement of the partial mobilization: “I will break an arm, a leg, anything to avoid leaving”. Another witness spoke of a 12-hour wait and said he wanted to leave Russia to avoid enlistment and be able to continue his studies.

According to what is reported by the Bbc, other destinations reachable by plane – such as Istanbul, Belgrade or Dubai – have seen air ticket prices skyrocket soon after the announcement of the mobilization, with some destinations completely sold out. Turkish media reported a sharp increase in one-way ticket sales, while remaining flights to visa-free destinations can cost thousands of euros. German Interior Minister Nancy Faeser on Thursday signaled that Russians fleeing draft would be welcome in her country and said that deserters threatened by “severe repression” will receive case-by-case protection after security checks. safety. Lithuania, Latvia, Estonia and the Czech Republic, reports the Bbcinstead, they announced that they would not offer refuge to fleeing Russians.