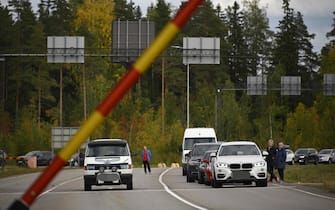 Since the Russian president last Wednesday Vladimir Putin announced the mobilization of at least 300,000 reservists, an ever-increasing number of citizens are continuing to try to leave Russia. In particular, there are very long queues on the border with Georgia and Finland, but also with Kazakhstan

WATCH THE VIDEO: Russia, citizens on the run: long queues

The BBC reports that there is one at the border to enter Georgia tail of ten kilometers. Cars manage to cross the border very slowly and some have claimed to have waited more than 20 hours to cross. Traffic at the border between Finland and Russia has also increased

Long queues have formed in the last few days at border between Russia and Georgia. Endless lines of cars carrying mostly Russian men are trying to leave the country to avoid forced conscription for the war in Ukraine. The Kremlin states that the reports of the flight of men of draft age are exaggerated

All updates on the Ukraine-Russia war

A man in line of call-to-arms age, who did not want to give his name, told a reporter that he took his passport and headed to the border without even packing his bags immediately after President Putin’s announcement. “I’ll break an arm, a leg, anything to avoid leaving,” he said. An increase in traffic is taking place also on the border with Finlandwhich shares a 1,300-kilometer border with Russia but requires a view for entry

They would be at least 70 thousand men fled from Russia or that they are devising an escape plan: it is the estimate of the non-governmental organization Guide to the Free World which helps the Russians who oppose the war to leave the country. President Ira Lobanovskaya explained in an interview with the Guardian that the NGO website has been visited more than 1.5 million times since Putin’s speech on partial mobilization.

“Who will be mobilized” and “How to leave Russia”: Russian searches on Google

The Finnish Border Guard has made it known that nearly 6,000 Russians arrived in the country on Thursday compared to 5,000 on Wednesday. Compared to countries close to the Federation, traffic on the Finnish border is limited by the fact that Russians need a visa to enter the country. But even if there were a hundred thousand or more fleeing Russia, it would be only a small part of the men under forty in the Federation: there are in fact about 20 million Russian men between the ages of 20 and 39.

There Finland has decided to “significantly” limit the entry of the Russians on its territory. The government, underlining that the influx of Russians trying to avoid being called to arms is creating “serious damage to Finland’s international position”, specified that the decision to limit entry and tourist visas was taken by the president and by a ministerial commission

Russia, citizens fleeing to avoid conscription: queues at the border with Georgia

Long queues of Russian citizens are also reported at the border with Georgia to enter the country and escape mobilization, even in bike. A man, who asked for anonymity, said he waited from 9 in the morning until the evening to be able to cross the border and thus circumvent the ban on crossing on foot

THE Baltic states and Poland they have already closed their borders for weeks, fearful that Moscow could infiltrate its agents on their territories