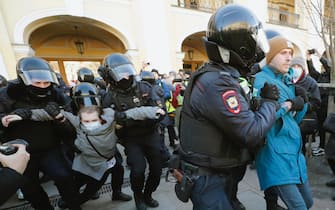 I’m 4,552 people arrested by the Russian police in the course of protests against the invasion of Ukraine starting February 24. This was reported by the independent website OVD-Infogruppo that deals with the protection of human rights in Russia

WATCH THE VIDEO: War in Ukraine, rumors from Moscow

Only in the day today I am over 900 people detained during protests that took place in 44 cities across Russia, from Moscow to Siberia

From academics to young people, passing through show business personalities, the number of Russian citizens opposed to the invasion of a country considered brother

War in Ukraine, the story of the Sky TG24 correspondent

In large cities such as Moscow and St. Petersburg, protests have broken out since 24 February. Defections registered between foreign staff of the Russia Today broadcaster, megaphone of the Kremlin, while “in protest” Elena Kovalskaya resigned from the position of director of the Meyerhol state theater in Moscow. “You can’t work for a murderer and get his salary from him,” she wrote on Facebook

Elena Chernenkothe most famous Russian foreign policy journalist working at the Kommersant newspaper (owned by one of Vladimir Putin’s close oligarchs, Alisher Usmanov) was expelled from the Foreign Ministry poolafter launching an anti-war petition that collected hundreds of signatures in a few hours

Meanwhile he has collected over 400,000 signatures in less than a day one online petition against war published on the Change.org platform and created, according to the online newspaper Meduza, by human rights activist Lev Ponomaryov

The day after the invasion, a group of Russian researchers and scientific journalists wrote an open letter condemning the military aggression

“This is a fatal decision that it will cause huge human losses and will undermine the foundations of the collective security system “, reads the text signed by over 2 thousand scholars,” the responsibility for unleashing a new war in Europe lies entirely with Russia ”

Already two weeks ago, independent Levada polls recorded an unprecedented fact: war was the second greatest fear of the Russians. Also the Levada noted, a few days ago, that only 45% of Russians are in favor of recognizing the two separatist republics of Donbass, which was then followed by military intervention

TO St.Pietroburgo the police have clearing out the protesters and arrested numerous people, according to what can be seen from the images transmitted by international televisions