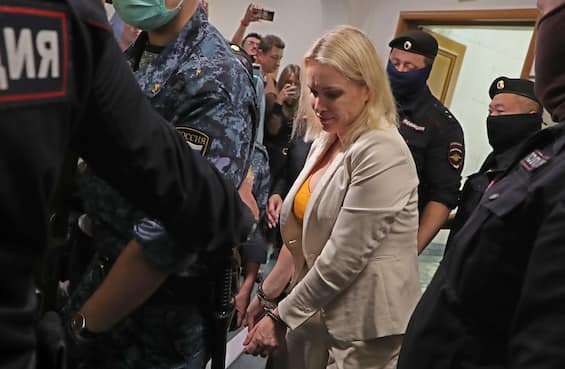 The Basmanny court in Moscow has ordered house arrest until 9 October of Russian journalist Marina Ovsyannikova, known for her opposition to the invasion of Ukraine by Russian troops. Novaya Gazeta Europe reports it. According to her attorney, the reporter faces up to 10 years in prison for an anti-war protest in July. Ovsyannikova was arrested yesterday August 10 by the Russian police on charges of “discrediting” the army (WAR IN UKRAINE, SKY TG24 SPECIAL – ALL UPDATES IN REAL TIME).

How the Russian “gag law” works

In Russia, a new “gag” law that came into force after the invasion of Ukraine began, provides for up to 15 years of imprisonment for the dissemination of information on the armed forces that should be deemed “false” by the Russian authorities. Under this rule, in practice, those who condemn the invasion of Ukraine risk heavy prison sentences in Russia, where the government is strengthening censorship by repressing all forms of dissent. Ovsyannikova is known for having surprise herself live in front of the cameras of Russian state television during the news showing a placard against the war in Ukraine ordered by Vladimir Putin. According to Novaya Gazeta, today’s hearing took place behind closed doors.