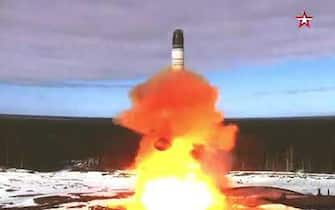 The Russian arsenal possesses a number of very sophisticated weapons, ranging from rockets to submarines. The flagship of Moscow’s defense programs for the development of innovative military systems is the Sarmat ICBM, of which only a week ago Vladimir Putin observed with satisfaction the “perfectly successful” launch (pictured) from the Plesetsk cosmodrome, on the White Sea. A weapon that “has no equal” in the world, “capable of evading any missile defense system”. A “super weapon”as the Russian media dubbed it

INTERCONTINENTAL MISSILES – At the top of the list is the Sarmat ballistic missile with atomic capability (pictured), which can hit the United States and according to the Roscosmos space agency will be able to guarantee Russian security for the next 30-40 years . A carrier capable of carrying 15 nuclear warheads and dropping them along a flight path of up to 18,000 kilometers

“This unique weapon – Putin warned – it will protect Russia’s security from any external threat and make those who try to threaten our country think twice. ” components made in Russiaas claimed by the Kremlin, and therefore would not be undermined by sanctions (in the photo a test from 2018)

Russia, how many nuclear weapons Moscow has and where they can strike: THE REPORT

Development plans include that it may also carry another ‘super weapon’, the Avangard planing hypersonic warheadbelieved to be able to bypass many anti-missile defenses

Chemical weapons, can Russia really use them in the war in Ukraine?

HYPERSONIC MISSILS – Then there are the hypersonic missiles such as the Kinzhal (pictured), which Russia was the first country to use in combat in Ukraine to destroy, among other things, deposits of enemy weapons: vectors that reach a speed at least five times higher than that of sound (6,190 km per hour), potentially reaching any goal in the world in an hour

What are hypersonic missiles used by the Russians in Ukraine

Weapons so threatening that they are called “unstoppable”. The list may also include the Tsirkon (a launch in the photo), anti-ship missile with a range of 500-1,000 km, which could also be used against land targets

NUCLEAR PROPULSION MISSILES – Another category is that of nuclear-powered cruise missiles, such as the Burevestnik (pictured). According to experts, the most mysterious of the Russian super weapons, however the one about which there is less information

If full operation is confirmed, it would be the first in the world. Due to its ability to fly virtually unlimited distances and at an altitude lower than that of many carriers, it would also be much more difficult for anti-aircraft systems to intercept

SUBMARINE – The defense programs are also naval, as demonstrated by the Poseidon submarine (pictured), an underwater robot capable of carrying out missions autonomously. Nuclear-powered, it can descend underwater up to 1 km deep, making it potentially unassailable by traditional submarines

According to Putin, “it can carry conventional or nuclear weaponswhich make it capable of hitting various targets, including aircraft, coastal fortifications and infrastructure ”