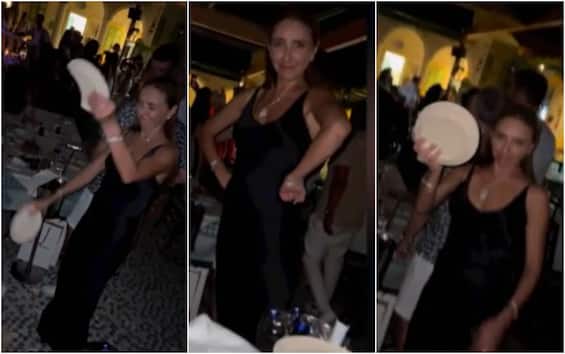 Is Tatiana Navka, wife of Kremlin spokesperson Dmitry Peskov in Greece? The question arose after the woman published some posts on her social profiles that suggest that she is on vacation in the Hellenic country. In particular, a video ended up under accusation in which the former skater smashes dishes in an outdoor venue with sirtaki in the background. What would be the problem if Navka was really in Russia? That her name and that of her husband are on the lists of people sanctioned by the European Union and the US for the Russian war in Ukraine and therefore the woman could not travel to Europe (WAR IN UKRAINE: LIVE UPDATES-SPECIAL) .

Tatiana Navka – 47 years old, former Olympic champion – posted the video, which later disappeared, on her Instagram profile which has 1.2 million followers. In the video she is portrayed during a party in an outdoor venue, with the sirtaki in the background, while she moves to the rhythm of the music she throws some porcelain plates on the floor. The video was accompanied by the text: “Breaking dishes on the floor is part of the nightlife in Greece. Sounds funny to me, what do you think? ”. The post soon made the rounds of the web and the case broke out. Many think it is a provocation, but not everyone is sure that the footage is current or shot in Greece. Among the first to talk about it, the American journalist born in Russia Julia Ioffe. Greek journalists have asked the government for an explanation. If the video had actually been shot in Greece these days, Navka would not have respected the sanctions. All while Europe is debating whether to ban tourist visas to Russian citizens. In recent days, the woman was on vacation in Ephesus, Turkey, and even in that case controversy arose over the advisability of her trip to a NATO country at this time.