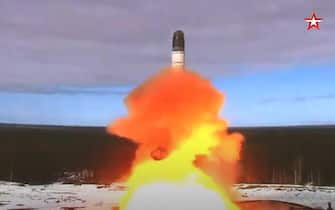 A weapon “that will have no equal for a long time” and “capable of evading any anti-missile defense system”. This is how Russian President Vladimir Putin presented the new intercontinental ballistic carrier Sarmatwhich was launched on April 19 in a test

At 15.12 in Moscow (14.12 in Italy) the launch button was pressed and the missile took off from a silo in the Archangel region, on the White Sea. Putin observed the scene in the Kremlin800 kilometers south: sitting at his desk, the Russian leader looked at the images that the military transmitted for him

Shortly after he was informed that the test of the new intercontinental ballistic carrier was successful. The tsar then announced to the world that Moscow has an extra weapon to defend itself “from current threats”

“It will make you think twice those who try to threaten our country in the frenzy of anger and aggressive rhetoric, “Putin said

Sarmat was launched from the Pleseck Cosmodrome, flew over much of the vast Russian territory, then fell in the Kura impact area, in the Kamchatka region, in the Far East. It has covered over 5,450 kilometers, enough distance – if headed west from the same starting point – to hit any target in Western Europe.

There maximum range of the Sarmat, a military source explained to the Tass agency last year, is equal to 18 thousand kilometers, just under half of the equatorial circumference. The Sarmats are destined to replace the R-36M2 Voevoda, in service for fifty years, and the first base to make the replacement, the Russian Defense announced, will be that of Krasnoyarsk, in central Siberia, by the end of the year.

The missile, Putin pointed out, was entirely made with components made in Russia: a way of saying that American and Western sanctions will not prevent Moscow from continuing its technological development programs. The Sarmat, the Russian president assured, “has no equal” in the world and is “capable of evading any missile defense system”

The Pentagon immediately downsized the military scope of the event: this is a “routine” operation not considered a “threat”, said the US military leaders, stressing that they had been warned in advance by the Russians in compliance with international agreements

The launch tests, initially scheduled for the third quarter of 2021, will be at least three, one of which will cover the maximum range. The Sarmat is capable of flying at a speed of 24 thousand kilometers per hourweighs 208 tons, can hold up to 178 tons of fuel and carry a warhead weighing nearly 10 tons

Sarmat was announced by Putin in 2018

The transport of the missile